Activists prepare to take on Trump

Protesters are preparing for US President Donald Trump's visit to Israel. 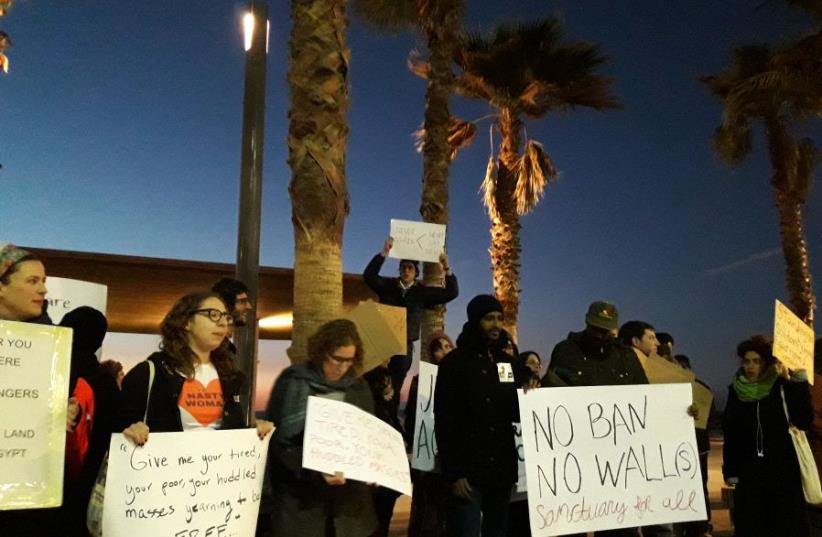 Protest in Tel Aviv against US travel ban on Jan. 29, 2017
(photo credit: TAMARA ZIEVE)
Advertisement
US President Donald Trump will get a taste of Israel’s robust democracy next week, with activists preparing to demonstrate on Monday, during his visit.At least two demonstrations will be taking place Monday. One, taking place in tandem in Tel Aviv and Jerusalem, is against Trump, and the other is calling on him to take action against Palestinian incitement.The Almagor Terror Victims’ Organization plans to pitch a tent in Jerusalem’s Independence Park, across from the US Consulate. The tent will be adorned with materials from Palestinian Media Watch showing examples of how the Palestinian Authority incites to terrorism against Israelis on its official media, in its schools, and in the honors it bestows on terrorists, like naming streets and public squares after them.The request to the police that would allow them to set up the tent was submitted by Hadas Mizrahi, whose husband Baruch Mizrahi, a police officer, was shot by Palestinians near Hebron on Passover eve 2014.Almagor also sent a letter to Trump this week, signed by over 100 victims of terror and their relatives, which states that they are “concerned about [Trump’s] plans to facilitate direct talks between Israel and the Palestinian Authority prior to any declaration by the latter to halt payments to murderous terrorists... In the past year alone, the PA has paid some $250 million to terrorists, which is nothing short of incitement that motivates Palestinian youth to murder Israelis.”The organization expressed hope that Trump’s presidency “heralds an opportunity for change,” but said “this change... must also affect the Palestinians. Before there is any dialogue, the Palestinians must demonstrate good faith and show that they are truly willing to change their ways by stopping incitement and halting all payments to terrorists who murdered Israelis, only for being Jews.”Prime Minister Benjamin Netanyahu has brought up the issue of the PA’s payments to terrorists often in recent months, and there are bills in the US and Israel to block or limit funding to the Palestinians as long as they continue the payments. Trump reportedly mentioned the issue to PA President Mahmoud Abbas when they met in the White House.Meanwhile, in the same park, an anti-Trump rally is set to take place, with over 150 people signed up on Facebook. The idea was the brainchild of Jacob Fortinsky, who is in Jerusalem studying at the Shalom Hartman Institute on a gap year between high school in New York and college later this year.Fortinsky had been politically active as a high school student, interning on Capitol Hill, and he felt “removed” watching Trump get elected while he was in Jerusalem.“What’s going on is unprecedented,” he said Thursday. “I felt a moral imperative to act.”Fortinsky set up a Facebook event, calling for an event “to show that there are people around the world, both Americans and natives in other countries, who oppose Trump on many of his stances, whether it’s his sinat chinam [baseless hatred] of others, his incompetence, his potential collusion with Russia, and a number of different things.”“This protest is a manifestation of that opposition,” he explained.Fortinsky contacted friends on other gap year programs and people he met who were involved in other, recent anti-Trump protests in Israel, who helped him get a police permit to hold the demonstration, and the numbers grew. Democrats Abroad became a sponsor of his event, as well as another one by the US Embassy in Tel Aviv, which was planned in conjunction with the Israeli branch of the pro-Hillary Clinton group Pantsuit Nation, and has nearly 200 attendees registered on Facebook.Jerusalem City Councilwoman Laura Wharton (Meretz) is expected to speak, as well as a Reform Rabbi, Rabbi Levi Weiman-Kellman.Fortinsky said: “Next year, I’m going to Harvard, and I have friends there organizing protests, but to me it seemed like an echo chamber, because three-quarters of the students there are liberal. It seems more poignant to do it here, because people seeing the protests are less naturally inclined to oppose trump. There’s potential for it to be more effective.”In 2013, when then-US president Barack Obama visited Israel, Palestinians and Israelis organized protests against him. Palestinians protested that Obama did not go to former PLO chairman Yasser Arafat’s grave, while students from Ariel University protested that they were not allowed to attend Obama’s speech to Israeli students from every other university in the country.