Rejection of Rabbi Lookstein conversion is "severe injury" to standing of Israel in Diaspora Jewry, say protesters in Jerusalem. 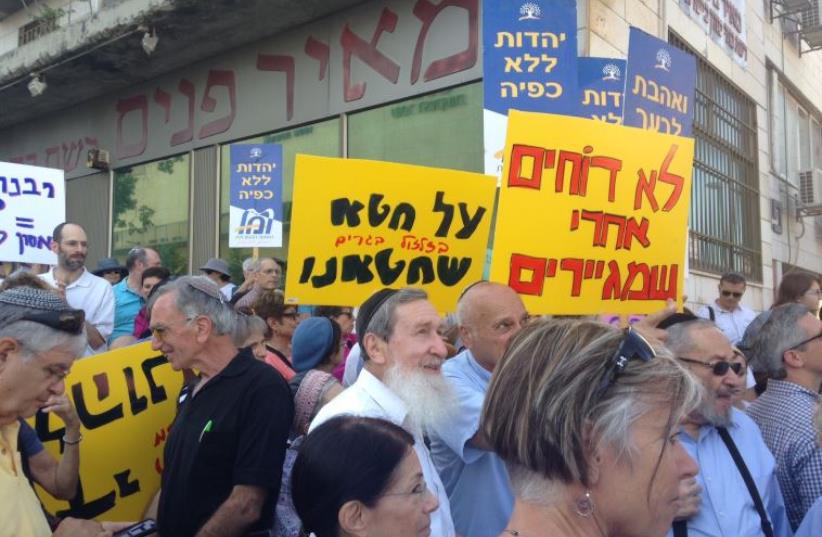 Demonstration outside the Chief Rabbinate's Office in Jerusalem, July 6, 2016
(photo credit: JEREMY SHARON)
Advertisement
Some 150 people gathered outside of the offices of the Chief Rabbinate on Wednesday morning to protest against the recent rejection of a conversion performed by prominent US Jewish leader Rabbi Haskel Lookstein by the Petah Tikva rabbinical court. The decision has generated widespread indignation from Jewish leaders in the US and activists in Israel who say the incident reflects a wider rejection by the religious establishment in Israel of the religious legitimacy of Diaspora Jewry. Numerous prominent public figures turned up to the rally including Jewish Agency Chairman Natan Sharansky, prominent modern-Orthodox leader Rabbi Shlomo Riskin, and MKs Elazar Stern, Aliza Lavie and Yehuda Glick.Speaking to The Jerusalem Post, Sharansky said that he was personally familiar with Lookstein because of his participation in the struggle for the rights of Soviet Jews under Communist oppression in the 1970s and 1980s.


“I am not here to defend Rabbi Lookstein’s good name which goes before him, but rather I am here to fight for the good name of the State of Israel,” said Sharansky. “We are at the height of the struggle against the delegitimization of Israel, when our enemies are trying to disconnect the generation of our youth from the State of Israel and we say all the time to them through our various emissaries that there’s no reason to be embarrassed about this connection.“But suddenly the State of Israel itself says to them ‘your leaders and your rabbis are not our leaders and not our rabbis and we don’t recognize them.’ This is a severe injury to the status of the State of Israel among World Jewry.”The decision of the Petah Tikva rabbinical court has been appealed through the ITIM religious services advisory and advocacy group to the Supreme Rabbinical Court and is expected to be overturned in a hearing set for today (Wednesday).Chief Rabbi David Lau has rejected criticism of the chief rabbinate in this current case, noting that the chief rabbinate advised the Petah Tikva rabbinical court to accept Lookstein’s conversion, advice that was ultimately rejected. ITIM director Rabbi Seth Farber said however that the recent decision highlighted the “chaotic” approach of the chief rabbinate in dealing with these concerns.Farber said that cases in which the credentials of Diaspora rabbis are rejected occur frequently, including several new cases in the last few days in which Orthodox conversions have been rejected by the chief rabbinate’s offices. “US Jewry is offended by this and it widens the gulf that already exists for other reasons,” said Farber. “It says to the average Jew ‘not only do we not represent your policies but you’re not even welcome here, we don’t even recognize your identity or your religious leadership, and that’s unacceptable.”Farber said that the protest was therefore directed against the management by the chief rabbinate of such issues, saying that the demand was not to dismantle the rabbinate but rather to underline that it has “a responsibility towards converts first of all, to the State of Israel and to the Jewish world to treat this issue very seriously and organize things in a way that will not cause people to suffer.”