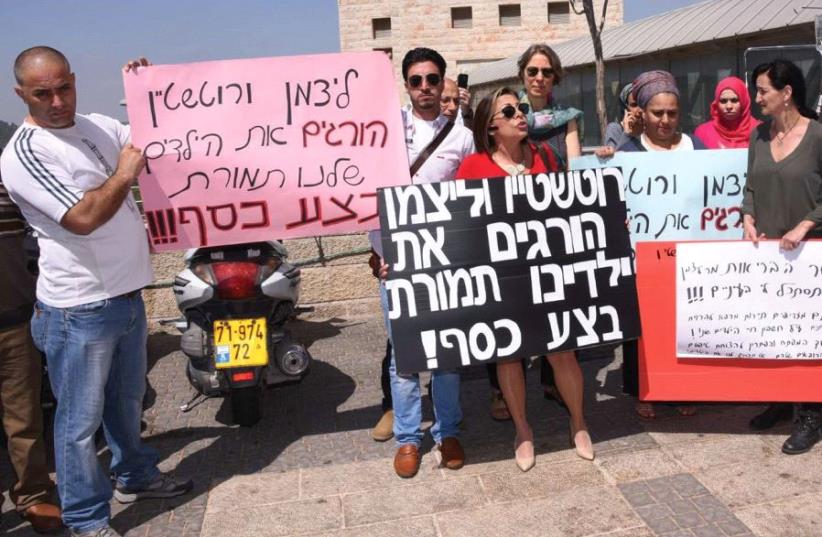 ‘LITZMAN AND ROTSTEIN are killing our children out of greed!’ say the two signs on the left during the protest at Hadassah-University Medical Center in Jerusalem’s Ein Kerem.
(photo credit: Courtesy)
Advertisement
Two dramatic protests disrupted the capital Tuesday when disabled Israelis attempted to self-immolate in front of the Prime Minister’s Residence over low disability payments, and parents of pediatric cancer patients blocked the western entrance to the city over a court ruling.During an evening protest, dozens of disabled demonstrators opposed the government’s proposal last week to increase their monthly state stipends from NIS 2,342 to NIS 4,000, which they deemed unacceptable to maintain a reasonable standard of living.The protest follows a series of similar demonstrations in Tel Aviv, after it was reported that a governmental committee appointed by the prime minister refused to raise the monthly stipend to minimum wage, which is NIS 5,000.At least two of the demonstrators poured lighter fluid on their bodies and attempted to light themselves on fire, before police stopped them. When that failed, one protester set a mannequin in a wheelchair on fire, forcing police to extinguish it moments later.There were no arrests and no injuries, police said.A bill ratifying the disputed increase is scheduled to be voted on in the Knesset in July, and would go into effect in January.Earlier Tuesday, parents of children hospitalized with cancer used gurneys to block traffic on the main entrance to the western portion of the capital to protest an ongoing dispute over limited resources allocated to Hadassah University Medical Center in Ein Kerem’s pediatric blood cancer department.The protest, which extended from Gan Sacher Park to the Bridge of Strings, followed a High Court ruling earlier in the day rejecting a petition from the parents demanding an additional pediatric blood cancer treatment facility at Shaare Zedek Medical Center to meet their children’s needs amid controversial hospital cuts and resignations.The joint petition was filed after Health Minister Ya’acov Litzman refused to agree to allocate funds to open a second department for the children, despite the growing crisis at Hadassah. The standoff sparked the resignation of multiple physicians, who have advised the parents to seek treatment for their children at better equipped hospitals throughout the country.On Tuesday, the court ruled that the parents must mediate the dispute with Hadassah directly to come to a resolution.Police removed the protesters and gurneys from the thoroughfare to allow traffic to pass, but allowed the parents to demonstrate with signs on the side of the road.There were no arrests or injuries, police said.