In addition to 546 from France, Ra'anana's mayor said there were nearly 300 English speakers and miscellaneous newcomers from Turkey, Italy, South America, and even Morocco. 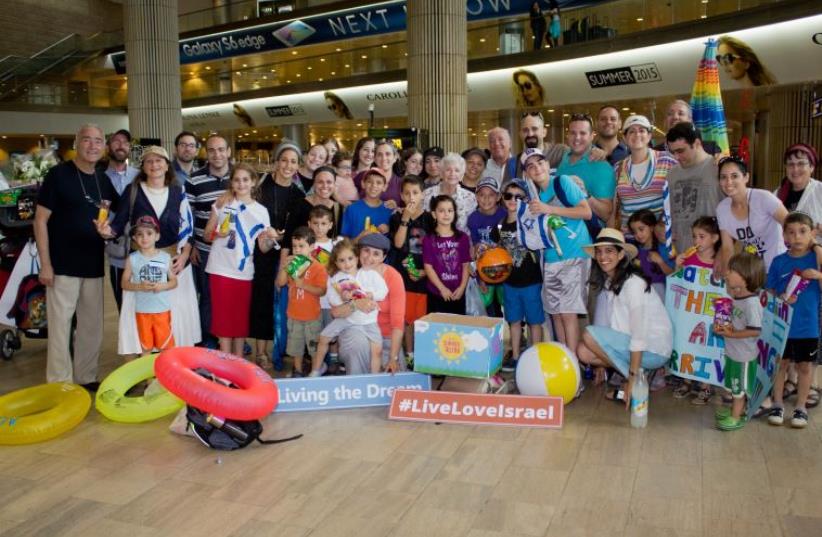 Nefesh B’Nefesh olim land in Israel
(photo credit: RAFAEL DIFURIA COURTESY OF NEFESH B’NEFESH)
Advertisement
Of the almost 30,000 new immigrants who arrived in Israel over the past year, more than 1,200 have settled in Ra’anana, boasts mayor and former Jewish agency chairman Ze’ev Bielski.Speaking to The Jerusalem Post prior to Rosh Hashana, Bielski said his administration has made a concerted effort to reach out to incoming olim, noting that although previous years have seen the famously Anglo town absorbing mostly English speakers, demographics have been shifting.In addition to 546 from France, he said there were nearly 300 English speakers and miscellaneous newcomers from Turkey, Italy, South America, and even Morocco.“It’s significant. The whole city is feeling it. The absorption center is completely full. The ulpan, we can’t even fit a pin into it, and we have to enlarge [it] because the demand is so great,” he said.The city’s education system, he said, is “geared to accept olim,” with ulpanim and schools specializing in absorbing newcomers and teachers trained to deal with the special problems that may crop up.“We give them [the olim] extra Hebrew lessons. We have got a very strong education department within the municipality that is trying to answers the needs of each family,” he continued, adding that the city government also looks to help newcomers with employment and other aspects of their immigration.“We love the olim we want them to come and we do every thing we can to help them be absorbed in Ra’anana.”To further that goal, and keeping in mind the changing nature of immigration to the city, Bielski said that after the holiday a new ulpan will be opened “for the teachers in the schools that absorb the children… for the teachers to learn French.”Even if they cannot speak their pupils’ mother tongue fluently, a little French will go a long way in allowing for open communication, he explained.At the start of the current school year, 2,900 children of new immigrants began their studies in Israel, and, according to Bielski, 400 of which are in Ra’anana.Aside from the education system, the presence of preexisting expatriate communities with their own institutions and organizations provides a safe landing pad for those coming to the Jewish state.Among those who made the move to Ra’anana is Los Angeles native and former broadcast journalist Gila Parish, who arrived in mid-July.Describing Ra’anana as the “jewel of the entire region,” she said she has a “special affinity” for the city and that it has an excellent reputation among English speakers.“I have friends who used to live in Ra’anana and my sister [lives there, as well] and she spoke really highly. I came and checked it out and fell in love with it, it’s a beautiful place,” she said.“I think the word of mouth is going out regarding the potential of this place. It is close to everywhere but still retains that small town feel. It’s not too congested or impersonal.”While Parish lived in Israel 35 years ago and speaks fluent Hebrew, her husband struggles with the language and coming to a city in which there is a substantial Anglo community “makes the transition a lot smoother and [less] stressful,” she said.“I think that if everyone knew how beautiful Ra’anana is they would all come here.”