Controversy over beard permit beards seen as another blow to the authority of the IDF Rabbinate. 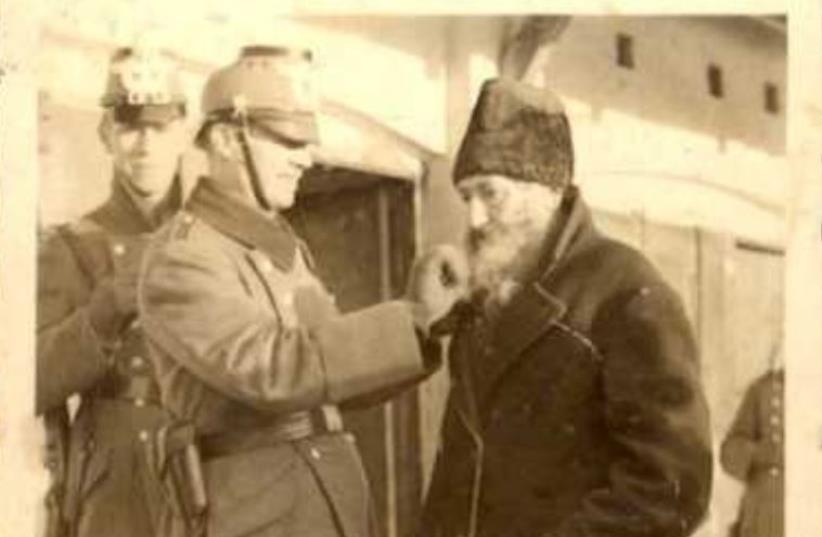 Nazi cutting beard of elderly Jew, Kielce, Poland
(photo credit: YAD VASHEM)
Advertisement
Large numbers of religious IDF soldiers have had requests to have a beard while serving denied in recent weeks, ahead of a new directive from the IDF Manpower directorate which will make it more difficult to obtain permission to grow a beard. The development led to Bayit Yehudi MKs Moti Yogev and Betzalel Smotrich to call for the new directive to be scrapped. In general, it is prohibited to have a beard while serving as an IDF soldier or officer but until now exemptions could be granted by the IDF Rabbinate. Jewish law prohibits shaving with a razor blade, although shaving with an electric shaver is permitted. Many religious people are stringent not to shave at all however. In December, a new directive was issued by the IDF Manpower Directorate which will require not only approval from the IDF Rabbinate but also from the soldier’s unit commander and from the IDF Adjutant Corps, a branch of the Manpower directorate. The new requirements are set to go into effect on Tuesday and requires anyone who has had a beard until now to re-apply for the exemption.  The prominent national-religious figure Rabbi Shlomo Aviner compared the new IDF beard rules to the Nazis who humiliated Jews often publicly by cutting off their beards.  "Except for the Nazis in Germany it does not say anywhere that a non-religious Jew must shave," the rabbi told the Srugim religious news outlet. Aviner, head of the Ateret Yerushalayim Yeshiva in Jerusalem’s Old City and the rabbi of the Beit El settlement, was responding to the concern that if permits for beards are given to religious soldiers, secular soldiers will also want to grow them.  Aviner said the IDF rules were reminiscent of "dark times" and in this connection he described a Holocaust era photo in which "German soldiers can be seen standing by two Jews while they force one to shave the other's beard off in front of the entertained crowd."  The Association of Hesder Yeshivas said on Sunday that in recent days it has received hundreds of complaints from religious soldiers who say that their requests were denied or unanswered, meaning that they will have to shave their beard by Tuesday. The Hesder program combines three and a half years of religious study in yeshiva with 17 months of IDF service.According to a spokesperson for the association, it spoke with some 400 religious soldiers who requested permission to have a beard, half of whom had their requests denied. It said that in once case, a battalion commander instructed his entire battalion including two platoons of Hesder soldiers that they could not have a beard. In another report received by the association, a soldier said that he was denied an exemption by his officer who told him that there was a directive from the the office of the chief of staff to reduce the number of permits issued  allowing soldiers to grow a beardHead of the Association of Hesder Yeshivas Muli Jesselson has called on the IDF Manpower directorate to postpone the implementation of the new directive until “clear answers” are given to the permit requests and appeals of soldiers who were denied are processed. “The security problems of the State of Israel and the challenges facing the IDF are so great and significant that the decision to trouble soldiers who grow beards is an inappropriate and unacceptable step,” said Jesselson. “There are hundreds of soldiers from the Hesder yeshivas, religious pre-military academies and others who see significant service in combat roles in the IDF as a religious commandment, and the order to remove beards does not sit well with the IDF being the army of the state of the Jewish people.” Yogev said that the new directive undermined the motivation of religious soldiers and called on Defense Minister Moshe Yaalon to restore the authority over beard permits to the IDF Rabbinate alone.Smotrich called the directive “absurd” and said that religious soldiers would likely go to military prison instead of removing their beards, adding that he intends to introduce legislation to legally ensure that religious soldiers are able to gain permits to not shave while on military service. The national-religious establishment has in recent months been greatly angered by a decision taken last month to remove the Jewish Identity Department of the IDF Rabbinate and place it under the command of the IDF Manpower Directorate. It was viewed by senior rabbis and politicians in the sector as an attempt to secularize the army and reduce religious influence. The current controversy over beards is similarly being seen as another blow to the authority of the IDF Rabbinate.The IDF spokespersons unit did not respond to a request for comment.

Jpost.com staff contributed to this report.
Advertisement
Subscribe for our daily newsletter