The notice called for a protest rally in the Bukharin Quarter, a haredi neighborhood which is not close to the pride parade route. 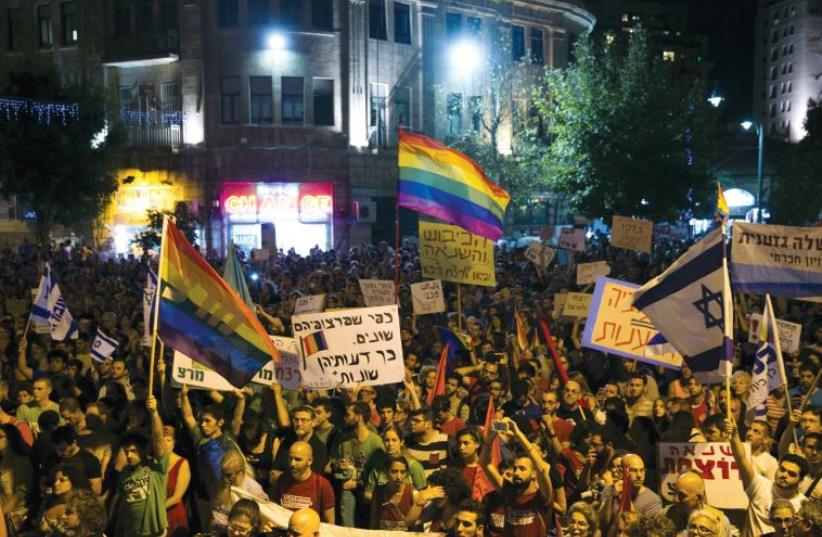 Protesters gather in Jerusalem on Saturday night after the Gay Pride Parade stabbings.
(photo credit: REUTERS)
Advertisement
Rabbi Dov Lior, one of the most senior rabbinical figures in the conservative wing of the national-religious movement, gave explicit backing Tuesday to the extremist Lehava organization for its protest against the Jerusalem Pride Parade slated to take place Thursday.“I find it correct to back your protest against the parade which the Torah calls ‘an abomination’ in the Holy City of Jerusalem, which harms the holiness of Jerusalem and its inhabitants,” said Lior.In addition to Lior’s comments, public notices have been posted in haredi neighborhoods across Jerusalem calling on the public to protest the parade.“Those who despise God plan to conduct a march of abomination as a massive international event in the courtyards of Jerusalem to defile and desecrate the Holy City, with the support of the municipal authority and funding from the regime,” reads a notice, first reported by Channel 2 Online.The notice called for a protest rally in the Bukharin Quarter, a haredi neighborhood which is not close to the pride parade route, and “for all Jews who tremble for the dignity of our holy Torah and of the holy city of Jerusalem to protest against this abomination in all over the Holy Land and especially in Jerusalem.”