Rabbis in conflict over whether to kill wounded terrorists

Rabbis Eliyahu and Mutzafi rule terrorists should be killed at scene of attack, Rabbis Stav and Ariel rule not to harm assailants if incapacitated. 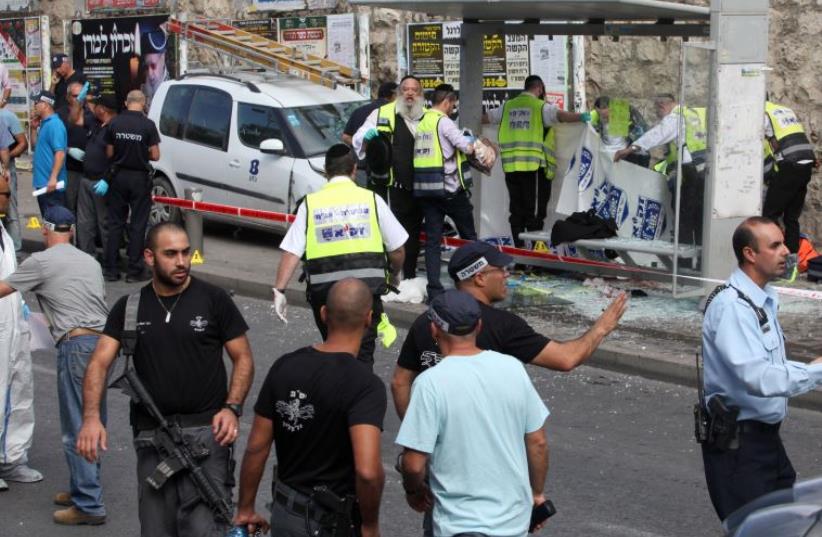 Scene of the ramming and stabbing attack in the ultra-Orthodox neighborhood of Guela in Jeruslaem October 13, 2015
(photo credit: GIL COHEN MAGEN / AFP)
Advertisement
Several senior rabbis have raised a heated debate over the approach in Jewish law toward a terrorist who has committed murder, but is subsequently injured and incapacitated.A terrorist who has been injured and no longer poses immediate danger should not be further harmed after committing a murderous attack– even when the nation is facing trying and difficult times, insisted prominent national-religious chairman of the Tzohar rabbinical association, Rabbi David Stav, earlier this week.“In these days in which the blood is boiling... it is important to preserve our moral superiority; [we must] not harm those involved in murderous acts who have already been neutralized and do not represent a threat,” he ruled.Safed Chief Rabbi Shmuel Eliyahu, reacting to Stav’s comments, said that a terrorist who had committed murder should be killed.“It is forbidden to leave a murderer alive,” Eliyahu told the Galei Yisrael radio station on Wednesday. He accused Tzohar rabbis of “forgetting Jewish law” because “they are only interested in looking good to non-Jews.”Continued Eliyahu, “Jewish law is clear... there are courts that can avenge blood and there are individuals who can avenge blood. This is Jewish law: If the court does not avenge the blood, then an individual can avenge the blood.”To “avenge blood” is a concept in Jewish law relating to the punishment for murder and manslaughter.“We can’t be consumed all day with what others are thinking about us,” the rabbi concluded.Rabbi Ben-Tzion Mutzafi, another senior rabbinical figure and prominent haredi arbiter of Jewish law, was also fiercely critical of Stav’s approach.According to the Srugim news website, Mutzafi was asked by his students whether, if a terrorist has been injured and incapacitated, it is permitted according to Jewish law to kill him.“It is commanded to take hold of his head and hit it against the ground until there is no longer any life in it,” Mutzafi responded.“Do not listen to Stav, for the one who is merciful to the cruel will end up being cruel to the merciful,” he added.Ramat Gan Chief Rabbi Yaakov Ariel, one of the most senior national-religious leaders, also waded into the debate.Asked on the yeshiva.org website about the differing opinions voiced by the rabbis on the issue, Ariel backed Stav’s initial comments, replying that only when the terrorist still presents a danger is it permitted to kill him.“If the danger has passed and the terrorist is restrained or injured, [people] must act wisely, judiciously and not through spontaneous emotion,” ruled Ariel.“The commandment to avenge blood is a major commandment in Islam; there is no need to add fuel to the fire.Death does not necessarily deter, since the one killed is typically portrayed as a shahid [martyr]. It needs to be evaluated with security experts.”