Speaking to Hebrew media, the mayor said he was “shocked” and called the threat “terrorism in every way.” 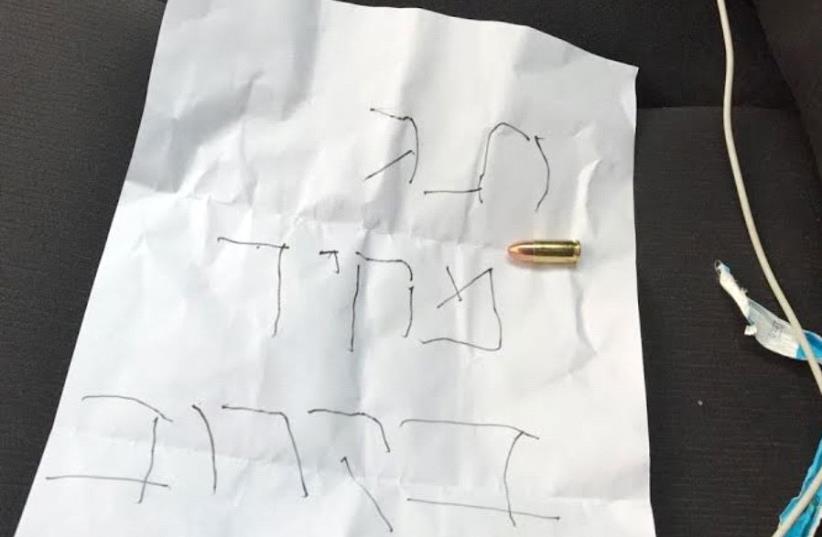 Threatening letter and bullet found in Ramat Hasharon mayor's car
(photo credit: GONEN ALIASI)
Advertisement
Police opened an investigation on Thursday after a bullet and threatening note were left on the car of Ramat Hasharon Mayor Avi Gruber.Gruber awoke Thursday to graffiti on his apartment building that read, “The Bar Yochai price tag,” in an apparent reference to the local Bar Yochai Yeshiva, which faces closure due to legal troubles.Later, the mayor also found a plastic bag attached to his car containing a bullet and a note that read, “A price tag is coming soon.”Price tag attacks typically refer to acts of vandalism, including graffiti and arson, that are carried out by radical settlers, primarily in the West Bank, in response to unwelcome government policies or alleged Palestinian violence.Speaking to Hebrew media, Gruber said he was “shocked,” and called the threat “terrorism in every way.”An official close to Gruber speculated that the threat may be connected to ongoing tension between the mayor and members of the city’s ultra-Orthodox community, including the lack of separate seating for men and women at this week’s Independence Day events, and the possible closure of the Bar Yochai Yeshiva.Police declined to offer a motivation for the threats, saying only that the investigation is ongoing.Gruber was elected to office last January after former mayor Yitzhak Rochberger was forced to resign two years earlier due to corruption charges. Gruber, who is not affiliated with a national party, won more than 70 percent of the vote in a runoff race against then-deputy mayor Ya’acov Koretzki of the haredi Degel Hatorah party.Gil Hoffman contributed to this report.