"We cannot continue to be quiet when we see young women go to this club and getting raped there." 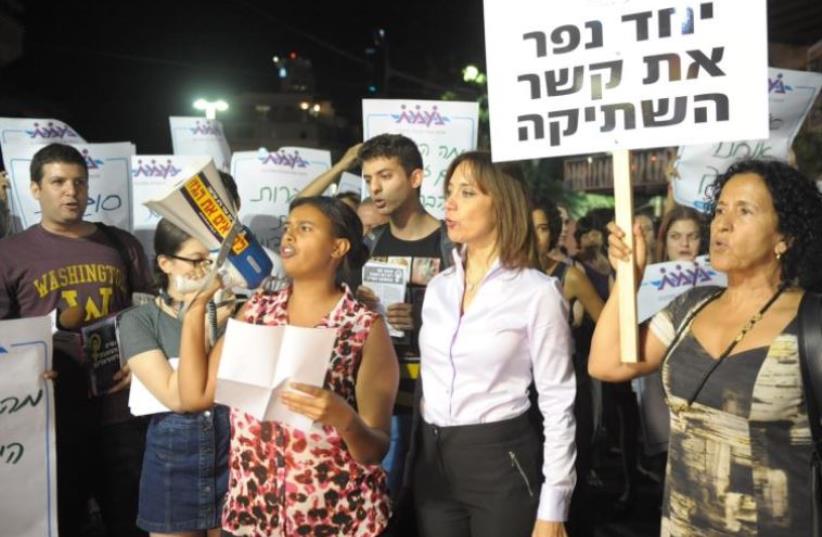 Protest outside Allenby 40, after suspected gang rape in the bar came to light
(photo credit: AVSHALOM SASSONI)
Advertisement
A national rape crisis association on Monday called for the Tel Aviv nightclub, Allenby 40, to have its business license permanently revoked following a second alleged sexual assault against a young woman there in less than one year.Citing the sexual assault of an 18-year-old female in the club’s bathroom last week – resulting in a 21-day forced closure – Orit Sulitzeanu, executive director of the Association of Rape Crisis Centers in Israel, said it is unacceptable that Allenby 40 continues to operate.Last October, Tel Aviv Police secured a 30-day closure for the nightclub shortly after several men were videotaped having sex with an inebriated woman on top of its bar. Police investigated the incident as a possible rape due to the woman’s inability to verbalize consent, although formal charges were never brought against the suspects.“Allenby 40 has a notorious reputation,” said Sulitzeanu, noting the infamous October assault subsequently viewed by millions online. “After that horrible case at this club it was temporarily closed, but it opened again.”“We cannot continue to be quiet when we see young women going to this club and getting raped there, or sexually assaulted,” she continued.“This is already the second time a woman was hurt there in a few months.”Moreover, Sulitzeanu compared rape to terrorism, and demanded that law enforcement treat it with the same immediacy and gravity.“In Israel, we are a country that is very efficient at taking care of citizens against terrorists,” she said. “I want now to change our frame of thinking, and also use our expertise in taking care of [women]. It’s not enough to put a guard outside the club to prevent terrorists from coming in; we have to have guards inside.”Noting the high consumption of alcohol that takes place at the club, coupled by the young ages of the victims, Sulitzeanu said she contacted the Tel Aviv Municipality, asking it to pull the place’s business license.“They need to take into consideration the security there,” she said. “You can’t just close your eyes and say it’s nobody’s business and allow it to continue.”To that end, Sulitzeanu also called for the creation of a municipal committee designated to protect at-risk women in such clubs. In the meantime, she said her association has contacted a lawyer to file a formal complaint and demand a resolution to create a committee.“Our main message is that somebody has to be responsible for what goes on there, and that this can’t go on,” Sulitzeanu said.A representative of Allenby 40 could not be reached for comment.