Antiquities Authority: Coins are tangible evidence of the Persian invasion of Jerusalem at the end of the Byzantine period. 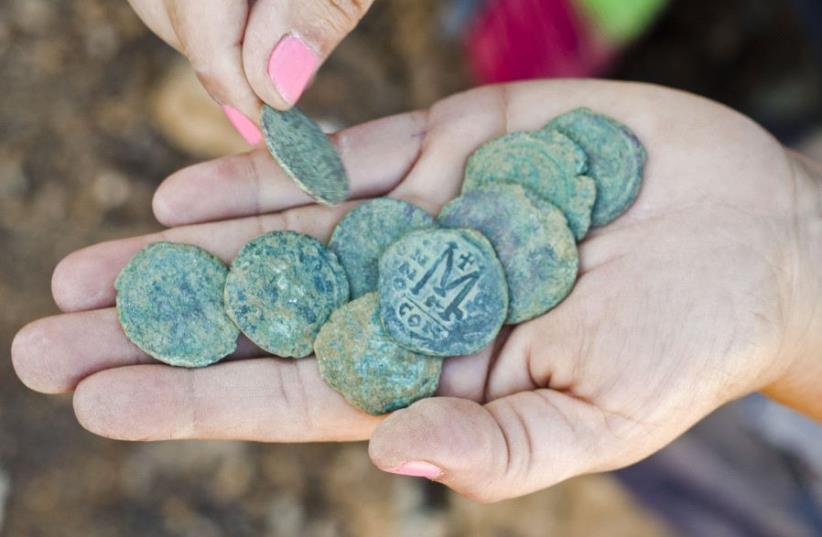 Rare 1,400-year-old bronze Byzantine-era coins found near Jerusalem’s Highway 1
(photo credit: YOLI SCHWARTZ/IAA)
Advertisement
A buried treasure of nine well-preserved bronze coins found by archeologists during an excavation near Route 1 serves as evidence of the Persian invasion of Jerusalem at the end of the Byzantine period, the Israel Antiquities Authority announced on Sunday.According to the Antiquities Authority, the coins, from the 7th century CE, bearing the images of Byzantine emperors, were unearthed in June during salvage excavations conducted by the authority as part of widening the highway near Ein Hemed, roughly 7 kilometers west of Jerusalem.(Credit: YOLI SCHWARTZ/IAA)The images of Byzantine emperors Justinian (483-565 CE), Maurice (539-602 CE) and Phocas (547-610 CE), all wearing military garb and carrying a cross can be seen on the coins.Annette Landes-Naggar, director of the excavation on behalf of the Antiquities Authority, said the coins were found bundled in a cloth purse deep in the ground by the wall of an ancient winepress.“The cache was buried adjacent to an area of collapsed large stones,” she said. “It appears that the owner hid them when there was danger, hoping to return to pick them up. But now we know he was unable to.”(Credit: YOLI SCHWARTZ/IAA)“Apparently, this was during the time of the Persian Sassanid invasion, around 614 AD,” she added, noting that the invasion was among the factors that ended the reign of the Byzantine emperors in Israel.
Roman and Byzantine-era mosaic discovered in Lod
“Fearing the invasion, residents of the area who felt their lives were in danger buried their money against the wall of a winepress,” Landes-Naggar said. However, “the site was abandoned and destroyed.”The winepress building, she said, belonged to a larger site extending across what is now Route 1, near a Byzantine church.“This site is situated alongside the main road from the entrance to Jerusalem and was used by Christian pilgrims to enter the city,” Landes-Naggar said. “Settlements were developed along the road.”Dr. Amit Shadman, an archeologist, said the authority and Israel Pipeline Company will work together to preserve the site for the public.