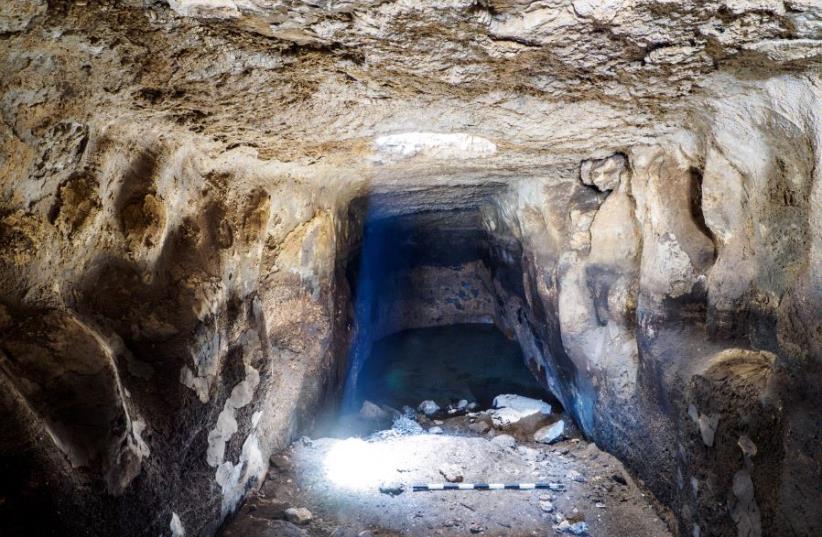 A view from inside the ancient reservoir
(photo credit: ASSAF PEREZ, COURTESY OF IAA)
Advertisement
A well-preserved 2,700-year-old reservoir from the Assyrian period was recently unearthed near Rosh Ha’ayin by archeologists from the Antiquities Authority, the authority announced on Thursday.The excavation was carried out with the aid of archeology students prior to the groundbreaking of a new residential neighborhood adjacent to the site, initiated by the Construction Ministry.According to Gilad Itach, director of excavations at the Antiquities Authority, the ancient reservoir – which had numerous engravings on its walls – was critical to the survival of local inhabitants living in the region during protracted dry seasons.
An ancient engraving of a human on the reservoir’s wall (ASSAF PEREZ, COURTESY OF IAA)“It is difficult not to be impressed by the sight of the immense underground reservoir quarried out so many years ago,” said Itach.“In antiquity, rainwater collection and storage was a fundamental necessity. With an annual rainfall of 500 mm., the region’s winter rains would easily have filled the huge reservoir.”Itach continued: “On its walls, near the entrance, we identified engravings of human figures, crosses and a vegetal motif that were probably carved by passersby in a later period.Overall, we identified seven figures measuring 15-30 cm. Most have outstretched arms, and a few appear to be holding some kind of object.”The reservoir, he said, is nearly 20 m. long, and reaches a depth of more than 4 m.“Some of the potsherds found on the floors of the rooms probably belonged to vessels used to draw water from the reservoir. It is highly likely that the structure and the reservoir were built at the end of the Iron Age [late 8th or early 7th century BCE], but whereas the building was abandoned during the Persian period, the reservoir was still in use until modern times.”In recent years, several other farmsteads built at the end of the First Temple Period have been discovered near Rosh Ha’ayin.“They were probably erected after the destruction of the Kingdom of Israel in 720 BCE, when the Assyrian empire dominated the region,” said Itach.“The establishment of farmhouses in this area is interesting, given the fact that many regions within the decimated Kingdom of Israel remained desolate. Some scholars believe that the establishment of the farmsteads was motivated by the empire’s wish to settle the area, which lay on an international route and near the western border of the Assyrian empire.”Itach said, however, that the structure exposed in the excavation is different from most of the previously discovered farmsteads.“Its orderly plan, vast area, strong walls and the impressive water reservoir hewn beneath it suggest that the site was administrative in nature and it may well have controlled the surrounding farmsteads,” he stated.
Students who participated in the Rosh HaAyin dig (GILI STERN/IAA)
Working in coordination with the Construction Ministry and Rosh Ha’ayin Municipality, the Antiquities Authority plans to make the site, located adjacent to the residential neighborhood being built, accessible to the public.