After making progress this year, the Education Ministry now aims to get 16-30% of high schools students to study mathematics at the highest level. 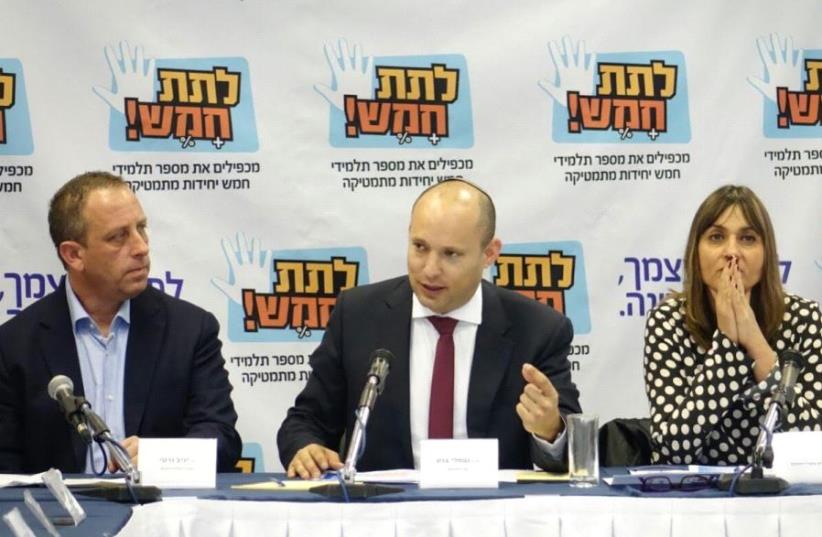 Education Minister Naftali Bennett at a press conference in Tel Aviv on Wednesday
(photo credit: COURTESY EDUCATION MINISTRY)
Advertisement
A record number of high school students are studying mathematics at the highest level (5 units) this academic year, Education Minister Naftali Bennett announced on Wednesday.“After years of a steady decline in the number of graduates with five units of mathematics, which was sufficient to jeopardize the comparative advantage of the State of Israel, the country is now enjoying an unprecedented period and is positioning itself in its proper place on the map of global excellence,” he said at a press conference in the ministry’s offices in Tel Aviv.According to statistics presented by the Education Ministry, some 16,644 12th grade students are studying five unit of mathematics during the current school year.This represents an increase of some 4,000 students over the previous year, surpassing the goal of 2,500 additional students the ministry set for the year.Upon taking office, Bennett placed a great deal of emphasis on reversing the downward trend of students taking the five-unit mathematics matriculation exam.Last year, the ministry announced its goal to double the number of students completing the five-unit exam within three years and increase Israel’s ranking compared to other OECD countries.Currently, Israel is ranked in the lowest bracket – along with countries such as Germany, Holland, Russia, Spain and England – with only 9.1% of high-school students completing high-level mathematics studies.The ministry said its new target will move Israel up to the next bracket of 16% to 30%, alongside countries such as Australia, Estonia, Finland, France, Hong Kong and Sweden.To that end, numerous reforms were introduced this past year to encourage students to take the highest-level exam.Since 2015, an additional 160 classes for five-unit mathematics studies have been opened – mainly in the periphery and among schools in the Arab, ultra-Orthodox and Beduin sectors – where there were previously no options for higher-level math studies available, according to the ministry.It also said it had allocated funding for an additional 2,000 hours of learning mathematics and to minimize class sizes, mainly in the country’s periphery.Some 3,000 hours will also be added for ninth graders, in an effort to help them integrate into higher-level mathematics the following year.Bennett noted at the press conference that in Ofakim, in the South, six times more students are studying five units in mathematics compared to three years ago.He said similar numbers can also be found in the Arab and Beduin sectors.“I imagine the number of doctors, engineers and researchers that will be here in a few years, graduates from schools of the geographic and social periphery – and it warms my heart,” he said.Bennett also stressed the importance of training excellent teachers in the field of mathematics. To that end, he said, 268 education students began training in high-level mathematics education this year, compared with 73 the previous year.