State comptroller report charges that current situation allows the Beduin population, which is generally poor, to become a breeding ground for crime. 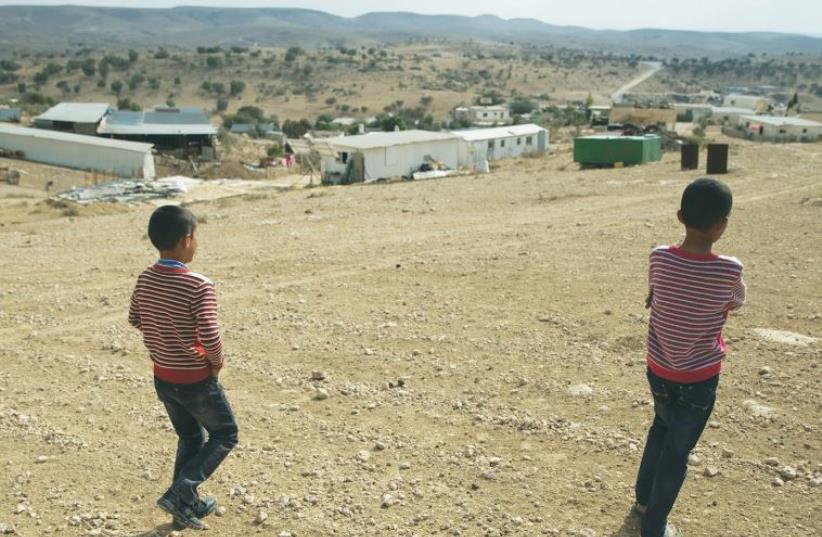 BEDUIN BOYS walk toward the ‘unrecognized’ village of Um Al-Hiram in the Negev.
(photo credit: REUTERS)
Advertisement
State Comptroller Joseph Shapira’s report published on Tuesday found that one third of the estimated 200,000 Beduin in Israel live in unrecognized villages and stated that the solution to the problem is “an issue of national importance of the first order.”The issue touches on legal, social, economic, and security issues that affect the entire country, it said.The current situation, it continued, allows the Beduin population, which is generally poor, to become a breeding ground for crime, resulting in further alienation of these citizens from the state.The main recommendations of the report included a call for the regulation of ownership claims “as soon as possible” and speeding up implementation of an action plan.It called for the government to determine and explain its policy, especially with the local Beduin population.The report also called for the development of basic infrastructure in legally recognized villages. Even some recognized villages remain without adequate infrastructure, electricity, or water distribution.“As long as the infrastructure of the recognized Bedouin communities is underdeveloped and does not provide a decent standard of living for residents, these communities cannot attract the Beduin population that lives in unrecognized settlements.”The report did note that the government decided on a five-year Negev development plan (2012-2016) that called for NIS $1.2 billion in spending.In addition, the report recommended for a policy to be drawn up that deals with how to enforce illegal construction.Over the years, Israeli governments have tried to regulate Beduin settlement in the Negev and to integrate Beduin into Israeli society by improving their standard of living, noted the report.However, from 2008 until 2014, the government was able to settle only about 1 percent of claims within the total land area in dispute.In addition, during this period, only around 3,400 people were resettled or around 3% to 5% of the scattered residents in unrecognized villages. But this success is canceled by the fact that Negev Beduin have a very high birth rate, estimated to be at 5% annually. The Beduin population is estimated to double in about 15 years.The report emphasized that the subject of regulating Beduin settlement does not depend on the government alone, but requires cooperation from the Beduin population and its leaders. The report did not delve further into this issue.In 2007, the government directed the Minister of Construction and Housing to appoint a committee to regulate Beduin settlement in the Negev. Retired judge Eliezer Goldberg headed the committee.Then, in 2013, the government decided to suspend the Prawer-Begin Beduin resettlement bill, which had gained opponents on the Left and Right.The Prawer-Begin bill was a five-year economic development initiative that sought to regulate Beduin settlement in the South. It aimed to find solutions for the tens of thousands of Beduin scattered in unrecognized villages throughout the Negev, legalizing 63 percent of claimed land.But Beduin supporters opposed the bill, arguing that the legislation would result in up to 40,000 Beduin losing their land.Opponents on the Right criticized the bill as too generous, saying the state would be giving away land for free that Beduin could not prove to be theirs in court.The more time that goes by without a deal, continued the report, it hurts both the state and the Beduin. Much of the population continues to live in limbo and the government falls more behind in improving living standards.