Yuval Diskin wrote a lengthy post on his Facebook page warning of the impending threat of Jewish extremism. 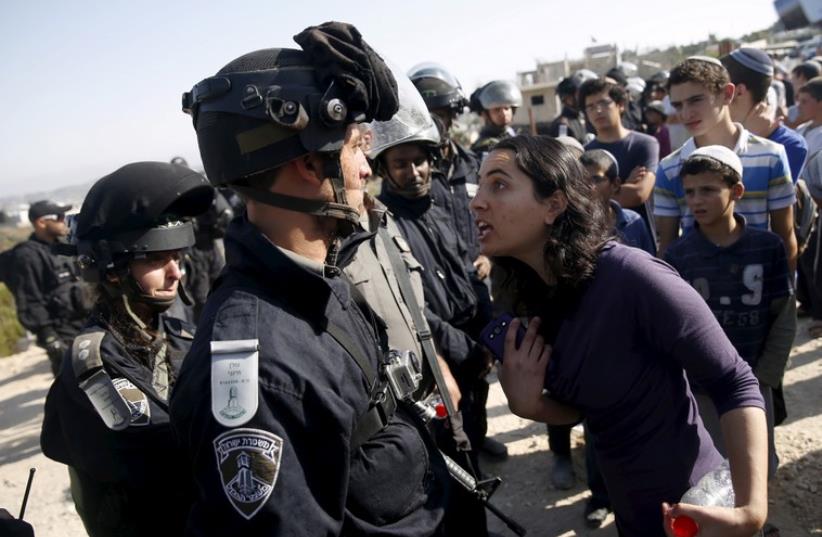 A young Jewish settler (R) speaks with an Israeli police officer near buildings slated for demolition in the West Bank Jewish settlement of Beit El
(photo credit: REUTERS)
Advertisement
Yuval Diskin, the former director of the Israel Security Agency (Shin Bet), warned on Friday that "religious Zionism is on its way to taking control of the State of Israel."In a lengthy post on his Facebook page, the onetime Shin Bet chief wrote: "The 'two-state solution' is emerging before our eyes amongst us Jews - there is the State of Judea, which is de facto being established alongside the State of Israel.""These are two states in which the differences between them is only growing, and this chasm is becoming irreversible," Diskin wrote.The former Shin Bet head posted the notice in response to the deadly arson attack in the Palestinian village of Duma last week that is alleged to have been committed by Jewish extremists in the West Bank."Religious Zionism does not constitute the majority in the State of Israell, but as a very significant elite it has succeeded in making a vital contribution to the establishment, de facto of course, of the State of Judea, and it is now on its way to consolidating (in a democratic manner) its hold on the State of Israel," Diskin wrote. "This is, without a doubt, a victory for the ideology of religious Zionism, but it's a pyrrhic victory," he wrote. "It's a tragic victory."Since the end of his term as Shin Bet chief, Diskin has emerged as a vocal critic of Prime Minister Benjamin Netanyahu, particularly over his policies as they relate to the peace process with the Palestinians.During the just-concluded election campaign, Diskin endorsed Zionist Union chief Isaac Herzog for premier.Diskin has lobbied for an agreement with the Palestinian Authority that would necessitate an Israeli withdrawal from wide swaths of the West Bank.