A reporter reflects on what it was like covering Israel’s ninth president. 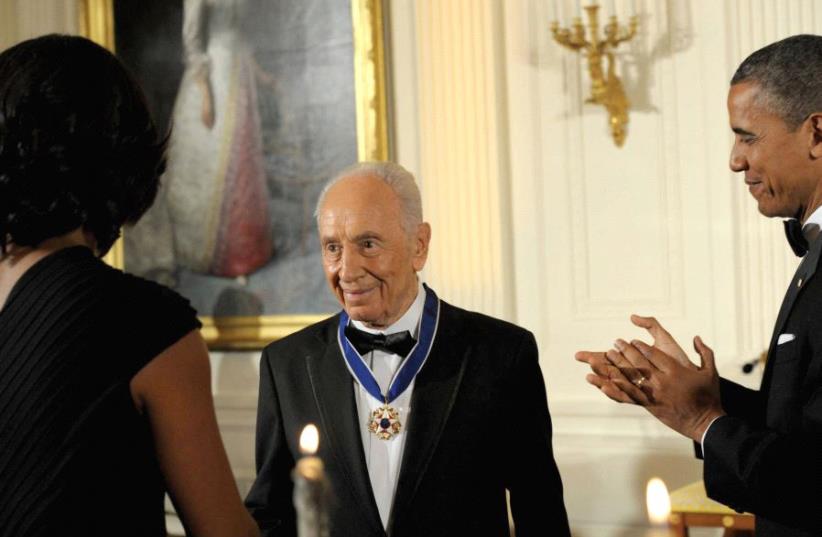 PRESIDENT BARACK OBAMA and first lady Michelle Obama applaud after awarding Peres the Presidential Medal of Freedom at the White House in 2012.
(photo credit: GPO)
Advertisement
What do Bill Clinton, the 42nd president of the United States and I, an Australian-born journalist living for more than half her lifetime in Jerusalem, have in common? We were both at the 80th and 90th birthday parties for Shimon Peres.There were loads of international dignitaries and celebrities at the 80th birthday bash in Tel Aviv’s Mann Auditorium, now known as the Charles Bronfman Auditorium, and even more at the 90th birthday gala at the Jerusalem International Convention Center, but what was most memorable about the 80th birthday was Clinton getting up on stage and singing John Lennon’s “Imagine” with then 16-yearold Israeli singing sensation Liel and a back-up chorus of 40 Jewish children and 40 Arab children. The audience went wild as Clinton and Liel stood together center stage, with him all but forgetting the words as he stopped to gaze at her in admiration, entranced by her powerful voice, and giving her a big hug afterwards.“Imagine,” as far as Clinton was concerned, became the Peres theme song, and he mentioned it on other occasions when they were together in Israel or in the US.But Peres had another song that he loved, “Avinu Malkeinu,” which is featured several times in the Yom Kippur liturgy. It was sung by his grandfather, Rabbi Zvi Meltzer, in the synagogue in Vishnie, in what was then Poland, with the young Shimon held close under his grandfather’s prayer shawl. Less than a decade after Peres, his parents and his younger brother left Poland, his grandfather was burned alive in that synagogue by the Nazis.Liel would have given a great rendition of “Avinu Malkeinu,” which Peres wanted to hear on his 90th birthday, but he preferred to have it sung by Barbra Streisand, and she specially came to Israel to oblige. It was sung again at his funeral by David D’Or, who has sung for royalty and heads of state and government around the world, but was never so emotionally moved as when asked to sing at Peres’s funeral. He had sung several times at state dinners when Peres was president, but to sing for him one last time was for D’Or the pinnacle of his career, even though he still has many years of achievement ahead of him.With regard to both birthday parties, Peres was subjected to a great deal of criticism before, during and after, and accused in some quarters of simply being a narcissist. To pretend that he didn’t enjoy the adulation would be foolish. Some of it may have been embarrassing and a little over the top, but how many of us can honestly say that we would not bask in the warmth and balm to the ego of so many great figures from so many countries and so many different backgrounds coming to do us honor on a milestone birthday? 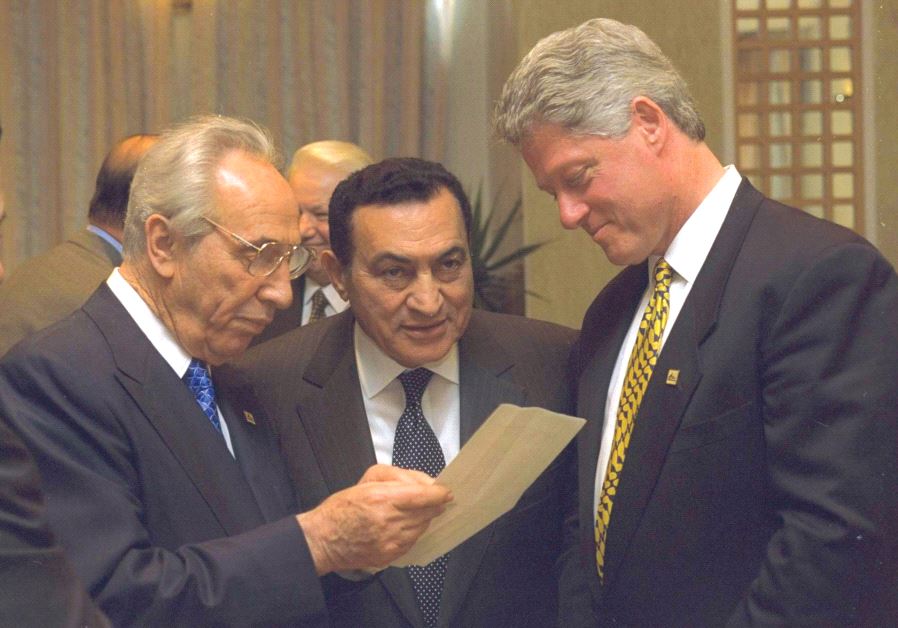 SHIMON PERES, former Egyptian president Hosni Mubarak and ex-US president Bill Clinton confer on the sidelines of the Sharm el-Sheikh peace conference in 1996. (GPO)The two celebrity-studded events were not solely for Peres but also for Israel, because the presence of so many famous people temporarily diminished the media focus on political, security and economic issues, and diverted attention to the international who’s who – who despite frequent attacks on Israel in and by the United Nations and its individual member states, put all criticism aside and came to join in the festivities.Although Peres was to some extent involved in preparing the guest lists, the 80th birthday party was actually hosted by Moshe Katsav, who had defeated Peres the first time that they stood for the presidential election.Katsav had a grudging respect for Peres, and could certainly afford to be generous in victory. In addition, everyone involved with the arrangements was fully aware of what a coup it was for Israel to have so many past and present world leaders and people of influence come together in this tiny bastion of democracy in the Middle East.It was bigger and better for the 90th birthday party, because Peres, still in office, was the oldest head of state in the Western world.But more than that, he brought his birthday forward to become an integral part of his annual Facing Tomorrow Conference, in which 3,000 invitees from around the globe came to Jerusalem, not only to celebrate, but to give lectures and participate in workshops on a myriad of subjects. There was also the underlying political importance that all this was happening in Jerusalem, which many foreign statesmen and politicians have yet to recognize as Israel’s capital.The event was widely reported in the international media, and Peres wanted to make sure that the dateline was Jerusalem – not Tel Aviv.Peres had previously resided in Jerusalem as foreign minister and as prime minister, but in neither case for as long as he lived in the capital as president.On his first day as the seven-year occupant of Beit Hanassi (The President’s Residence), all the regular Beit Hanassi reporters congregated outside the presidential compound hoping to get some comment from him now that he’d finally won an election.But his spokeswoman, Ayelet Frisch, who was determined to play down the negative and accentuate the positive, wouldn’t let us anywhere near him until such time as he had settled in. It was particularly important to those staff members who had accompanied him for years, that Peres should feel at home in his office, and in as much as possible, it was a duplicate of his office at the Peres Center for Peace, the 20th anniversary of which was marked this year. 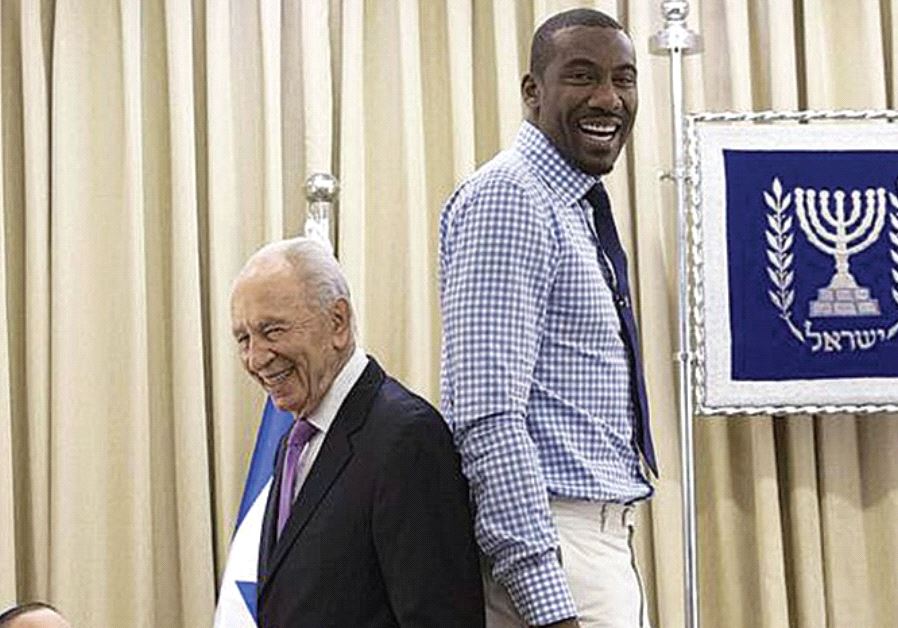