“French authorities liked it, but the official came back and said there was a higher-level instruction not to buy Israeli technology,” Israeli security source tells Fox News. 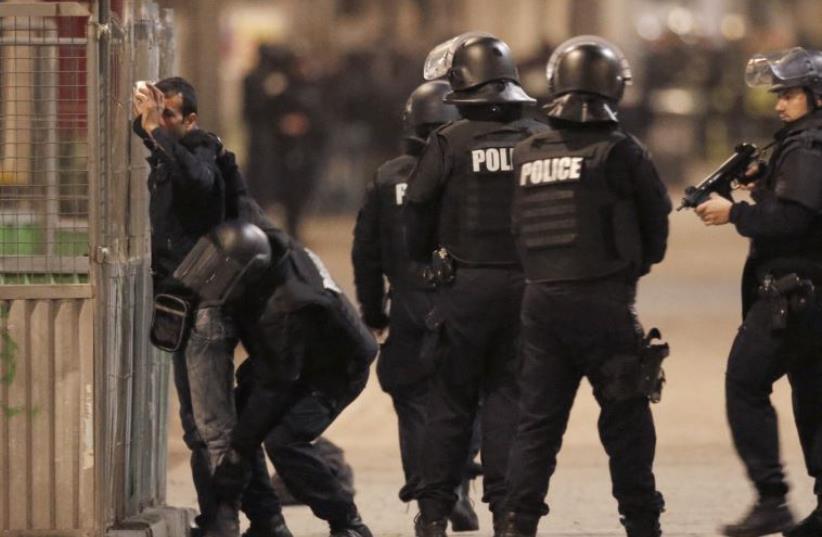 French spolice stop and search a local resident as shots are exchanged in Saint-Denis, France, near Paris
(photo credit: REUTERS)
Advertisement
Terrorist-tracking technology offered by an Israeli company to French security officials could have helped detect the Islamic State terror cells that carried out attacks in Paris last year and more recently in Brussels, Fox News on Monday cited an anonymous Israeli security expert as saying. But the Israeli proposal was rejected.“French authorities liked it, but the official came back and said there was a higher-level instruction not to buy Israeli technology,” a high-ranking Israeli counter-terrorism expert told Fox News.“The discussion just stopped,” added the source who was said to be familiar with the company and its technology. The source noted that the decision to decline the product could have been spurred by legitimate concern over hacking of the system. While the report said that France did not provide an official reason for rejecting the proposed deal, it stated that there was broad speculation that anti-Israel politics were behind the matter.In late 2015, the EU published guidelines on consumer labels for Israeli products produced over the pre-1967 lines, a move that strained relations between the European bloc and Jerusalem. The said offer of tracking software made to France's intelligence agency - the Directorate-General for Internal Security (DGSI) - reportedly came shortly after a deadly attack at the Charlie Hebdo magazine office in Paris in January 2015.The Israeli security source refrained from naming the intelligence technology firm or delving further details on its solutions. However, he underlined to Fox News that the technology could possibly have helped thwart the series of deadly November 2015 attacks that left 130 dead in Paris and the March bombings in Brussels that killed over 30 people. According to the Fox News report, the presented data-mining software provides a solution that is used to analyze and connect fragmented intelligence reports from various domestic and international databases. The Israeli source said the mechanism has the capability of scanning intelligence and Interpol databases in order to flag "high risk" people. The technology purportedly provides counter-terrorism agents with the most timely data on potential terrorism elements and could have aided authorities in "connecting all the dots" in France's Islamist extremist realm. Fox News reported that there was no response from DGSI to requests for comment on the report. The American cable news channel cited a European Union official as saying there are no formal French or EU bans on purchasing Israeli-made technology.