Palestinian officials from the coastal enclave are in Egypt in an effort to rebuild tattered relations between the two parties. 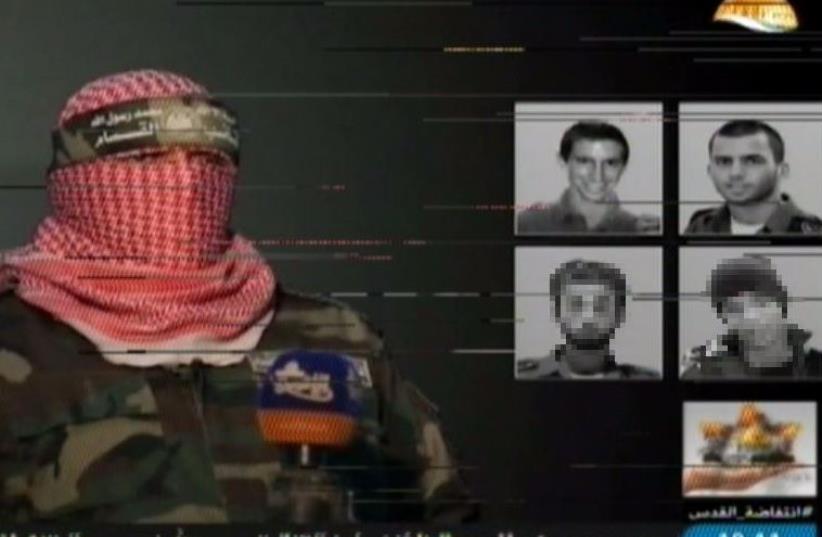 Al Aksa TV footage of Hamas military wing showing images of four Israeli "POWs"
(photo credit: ARAB MEDIA)
Advertisement
Egypt has asked the Islamist organization Hamas for information regarding the status of "four Israeli prisoners of war" the terrorist group claimed were in their custody earlier this week, Arab media reported Sunday.According to Egyptian daily Al-Arab Aljadid, Egyptian sources with direct knowledge of the ongoing situation said that a Hamas delegation sent to Cairo this week was asked about the four Israelis who died in action or went missing in Gaza. Palestinian officials from the coastal enclave are in Egypt in an effort to rebuild tattered relations between the two parties. Israeli officials said that Egypt and the Jewish state have enjoyed "the best relationship since the signing of their peace accord" in 1979, and remain optimistic that any new information Cairo receives will be passed along. On Friday, Hamas said that it is holding the remains of two Israeli soldiers and also has in its custody two Israeli nationals who went missing in the Gaza Strip.The group's military wing, Izzadin Kassam Brigades, released a televised statement through official Hamas media in Gaza on Friday saying Israel will have to make concessions if it wants the Islamist organization to provide information about the conditions of the "four prisoners of war."The Hamas spokesperson assailed Prime Minister Benjamin Netanyahu and denied that the organization was considering the release of the four Israelis."Netanyahu is lying to his people with his statements and he is pulling the wool over the eyes of the parents of the soldiers in our custody," said Abu Abeida, the Izzadin Kassam spokesperson. "There are no negotiations [with Israel] over prisoners."Last year, reports in Arab language media indicated that Hamas made two key demands of Israel as a condition for their release.Lt. Hadar Goldin and St.-Sgt. Oron Shaul were killed during Operation Protective Edge in 2014. Their remains remain in Hamas hands in Gaza.Another Israeli, Avraham Mengistu, who has been described in press reports as "emotionally unstable," wandered into Gaza in 2014 and has not been seen since.Mengistu was 29 when he disappeared and was suffering from severe depression. Israel’s Defense Ministry believes that Mengistu was held by Hamas after illegally crossing the border, but the Islamist movement governing Gaza has provided no information about his whereabouts or condition.The other missing Israeli national believed to be alive in Gaza is a Beduin from the Negev whose identity has yet to be revealed.A relative of the missing youth said last year that "he crossed the border once to Jordan, once to Egypt and once to Gaza - in February 2010 - and in all three cases he was returned to the family. The fourth time he must have entered Gaza again and didn't return."The missing youth's relative claimed that "nobody in the security forces shared information with the family on this incident." He added that the Coordinator of Government Activities in the Territories has brought the youth home from Egypt and Gaza in the past. "I hope that he is in Gaza again and that he will come back to us in peace," the relative said. "He is mentally ill and this is not the first time he's gone missing."