Four ships being manufactured in Germany were reportedly each originally slated to contain a single Iron Dome launcher. 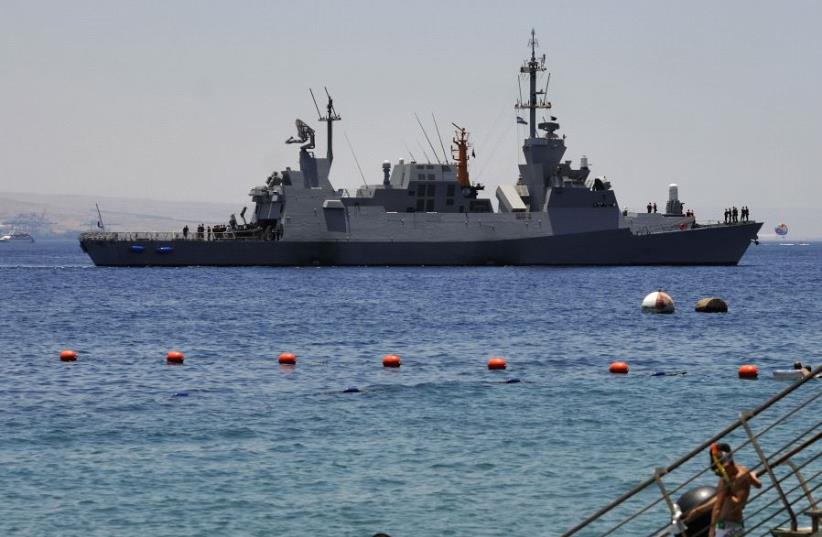 An Israeli warship arrives at an Israeli navy base in the Red Sea resort city of Eilat July 15, 2009
(photo credit: REUTERS)
Advertisement
Four ships being manufactured in Germany that were originally slated to each contain a single Iron Dome launcher reportedly will now have two.The threat of Hezbollah rockets targeting offshore natural gas platforms has prompted the Israeli Navy to add an extra Iron Dome launcher to the Sa’ar 6 missile ships that are currently being manufactured for Israel in Germany, Defense News reported on Monday.Defense News quoted a senior Israeli naval officer as saying the change in design was prompted by Hezbollah’s arsenal of Grad rockets and longer-range projectiles.“Because of this growing threat, we’re adding another launcher on the Sa’ar 6,” Defense News quoted the officer as saying of the ships intended to defend Israel’s offshore assets.
Israel Navy shoots down vessel in exercise in July 2016 (credit: IDF SPOKESPERSON"S UNIT)
Hezbollah is known to have various long- and medium-range missile systems, including the Iranian- made Fajr-5, the M-600 rockets, Zelzal-2 and the shorter-range M75 and Katyushas. But, according to a senior IDF officer in the IAF’s Air Defense Division, the terrorist group is continuously working to acquire missiles with larger warheads and longer ranges.According to Israeli estimates, Hezbollah has stockpiled more than 100,000 missiles.Last July, Israeli Ambassador to the UN Danny Danon said Hezbollah now possesses 17 times the number of missiles it did 10 years ago when UN Security Council Resolution 1701 was adopted at the end of the Second Lebanon War.Hezbollah now has “more missiles below ground in Lebanon than the European NATO allies have above ground,” Danon said as he presented recent IDF intelligence about the terrorist organization to the Security Council, including aerial photographs revealing Hezbollah positions and statistics about the organization’s weapons stockpiles.