Israeli spy services are monitoring Syria and Iraq which may have yielded intelligence on the organization of the Paris attacks, Army Radio said. 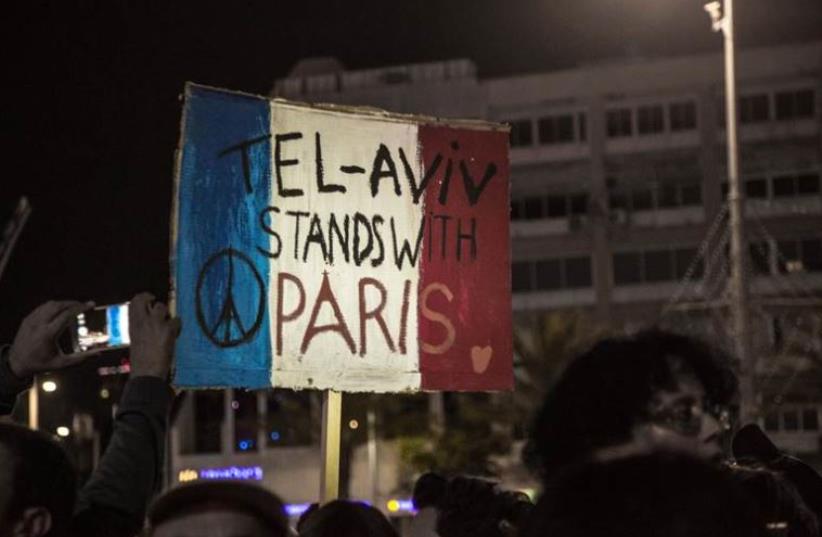 A sign at the solidarity rally held in Tel Aviv in the wake of the Paris attack reads "Tel Aviv stands with Paris", November 14, 2015.
(photo credit: Courtesy)
Advertisement
Israel said on Sunday its spy services were helping France investigate the Paris gun and bomb attacks, and Israeli media suggested that intelligence being provided drew on surveillance of militant groups in Syria and Iraq.

After Friday's rampage, which killed at least 129 people, Prime Minister Benjamin Netanyahu said he had ordered full cooperation with French and other European authorities trying to identify the perpetrators and prevent further attacks.

"The cooperation is ongoing, but in accordance with the prime minister's directive, intelligence material relevant to what happened has been relayed, and we will also deepen the cooperation," Intelligence Minister Yisrael Katz told reporters.

"This information can help the French - and not just the French, by the way - to deal with the aftermath, and not just with what happened, but also with terrorist attacks planned for the future," Katz said. He declined to give further details.

Army Radio said electronic surveillance of Syria and Iraq - where Islamic State insurgents have conquered swathes of territory - may have yielded intelligence on the organization of the Paris attacks.

According to Channel 2, Israel had no advance warning of the Paris attacks but within hours of the assaults gave France details on some of the Islamic State militants believed to have carried them out.