The report added that the number of senior ministry officials who were former Nazis was greater in 1957 than during the 1933-45 period when the Third Reich was in power. 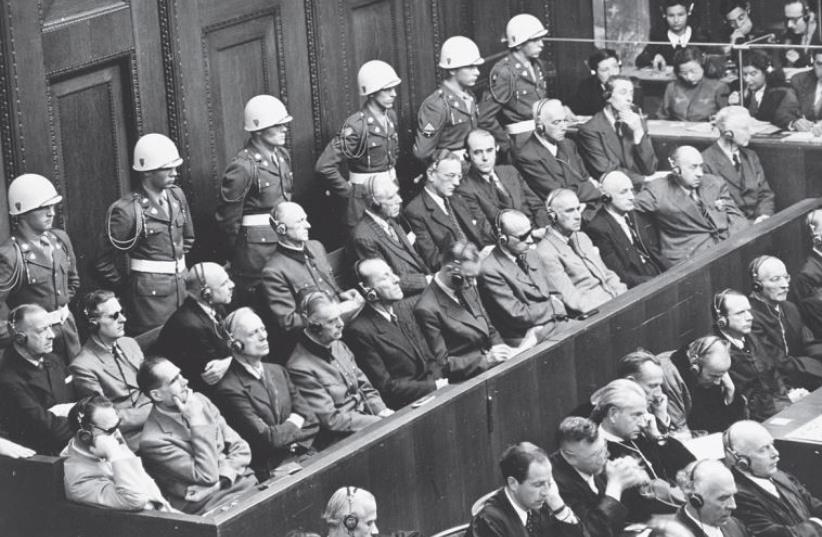 Nazi defendants listen to testimony at the Nuremberg trials, which set a precedent for prosecuting crimes against humanity
(photo credit: US HOLOCAUST MEMORIAL MUSEUM)
Advertisement
Nazi war criminals found refuge from prosecution by filling the majority of available positions inside West Germany's Justice Ministry following the end of WWII, RT News citing a German government study reported Monday. The document, released by current German Justice Minister Heiko Maas, said that between 1949 and 1973, 90 of of the ministry's 170 officials, including Judges and prosecutors, were former members of the Nazi party.Of those 90, nearly three dozen were part of the SA, the original paramilitary wing of the Nazi party, the report added.  The investigation noted that this contributed to a relatively low prosecution rate among former Nazi party members following the fall of the Third Reich.“At a time when a fierce struggle was underway about punishing Nazi crimes, the old comrades were reluctant to come under the scrutiny of young, unencumbered outsiders,” Christoph Safferling, co-author of the study, told German daily Sueddeutsche Zeitung. “The Nazi-era lawyers went on to cover up old injustice rather than to uncover it and thereby created new injustice,” Maas added.The document also found that many of the judges working in West Germany's Justice Ministry were responsible for ordering the extrajudicial killings of dissidents during Adolf Hitler's reign. The report added that the number of senior ministry officials who were former Nazis was greater in 1957 than during the 1933-45 period when the Third Reich was in power.Following the collapse of Hitler's Nazi Germany, the Nuremberg trials held by Allied forces saw some 6,650 former Nazi party members being convicted of war crimes and crimes against humanity. The relatively small number of prosecutions is beset by the fact that some Nazi criminals were given milder sentences because they proved that they had played minor roles in the Third Reich, according to RT.