"In August 1942, the last workers of the Jewish ghetto were killed there. A few thousand people, from 2,500 to 6,000 according to various sources.” 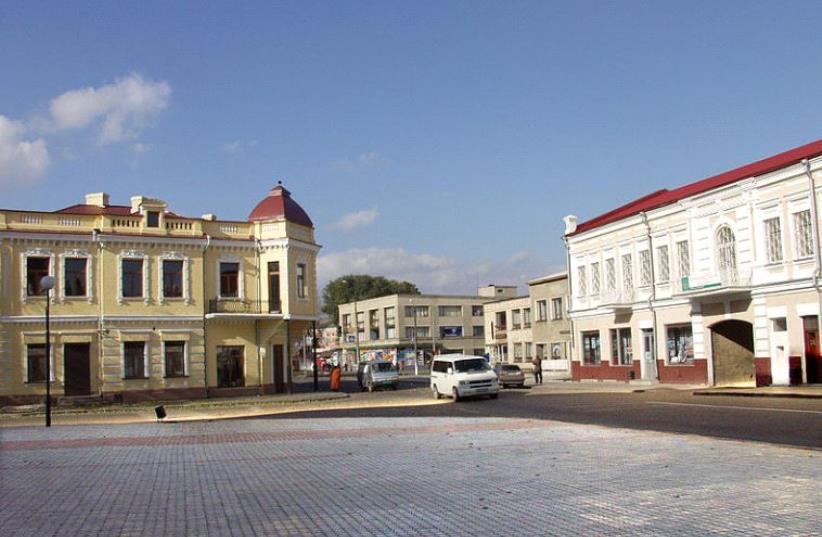 Square in Kovel, 2002
(photo credit: WIKIMEDIA COMMONS/IRAMAL)
Advertisement
A city in northwestern Ukraine authorized the placing of a traveling zoo on the mass grave of thousands of Jewish Holocaust victims, a leader of the country’s Jewish community said.Eduard Dolinsky, the director of the Ukrainian Jewish Committee, wrote Monday on Facebook about the traveling zoo that was erected this summer in the town of Kovel, 260 miles from Kiev, the capital.“This was done with permission of the local authorities,” wrote Dolinsky about the zoo’s construction. “This place is located at the former Jewish cemetery. In August 1942, the last workers of the Jewish ghetto were killed there. A few thousand people, from 2,500 to 6,000 according to various sources.”Dolinsky added he did not know whether the Kovel zoo, which was reported last week in the Volinska Gazeta local newspaper, was a case of “[idiocy], criminality, cynicism, apathy — or maybe all of the above.” He called it a “blatant act of vandalism and horrific abuse,” adding the local Jewish community had for years lobbied unsuccessfully to have the murder site commemorated with a monument.Kovel’s deputy architect, Sergey Panasyuk, told Volinska Gazeta the request for a monument is pending consideration and approval.The report about Kovel comes amid a polarizing debate in Ukraine following Kiev’s naming of streets in July for Stepan Bandera and Roman Shukhevych – Ukrainian militia leaders and one-time collaborators with the Nazis, whose troops are widely believed to be responsible for lethal violence against Jews and Poles during the Holocaust.In Ukraine, where anti-Russian sentiments exploded following a bloody revolution and annexation in 2014 of Ukrainian land by Russia, many believe these militiamen and others were patriotic heroes for their opposition to the Soviet Union.“People who allow this must be punished,” Dolinsky wrote of the zoo, “because they know what they’re doing. Although, most likely, nothing will be done to them.”Dolinsky also expressed concern the Kovel murders and aftermath will not receive widespread attention because of the preparations for the 75th anniversary of the killings at Babi Yar – a ravine in Kiev where the Nazis killed 30,000 Jews.The preparations at Babi Yar, he wrote, are “because foreign guests will arrive there. But in the city of Kovel, no one is coming” so locals can ignore the events of the Holocaust era.Last month, JTA reported that a concentration camp in Lithuania had become a popular venue for camping, treasure hunts, graduation events and adult costume parties. The Seventh Fort, where 5,000 are buried in mass graves, was privatized in 2009.