Bus flips over on Lower Galilee roadway, killing 1 and injuring 19

The accident occurred near Zarzir Junction in the Jezreel Valley region. 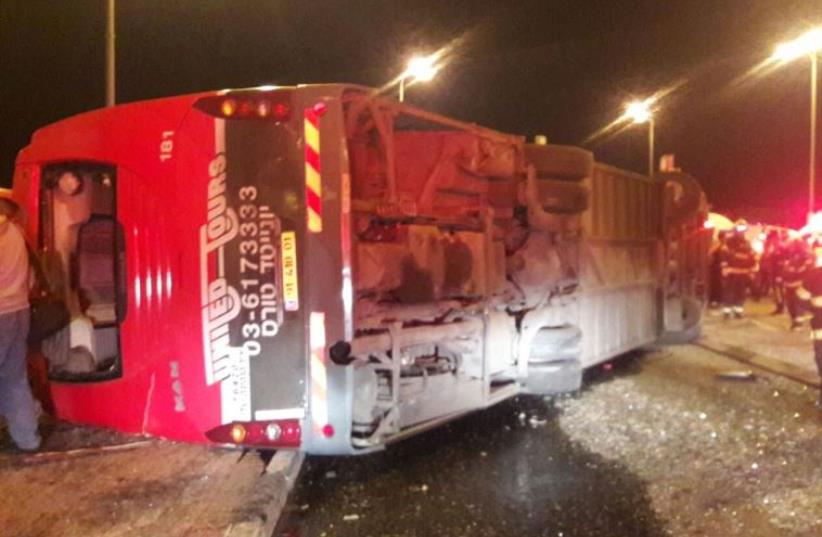 An overturned bus near Zarzir Junction in the Lower Galilee
(photo credit: Courtesy)
Advertisement
A bus carrying upwards of 30 passengers flipped over on a roadway in the Lower Galilee just before midnight on Wednesday, killing one man and wounding 19 others moderately.The accident occurred near Zarzir Junction in the Jezreel Valley region. According to medics who rushed to the scene, two of the passengers suffered critical injuries while at least 16 others are being treated for moderate-to-serious injuries.Medical officials pronounced dead a man in his 50s whose injuries proved fatal. Two men in their 40s were rushed to hospital with what is being called "moderate" injuries. The other seventeen victims suffered light injuries. Investigators are now trying to piece together the circumstances of the accident.The bus, which is a privately chartered vehicle, was found on the roadway on its side just after 11 p.m. on Wednesday.The overturned bus left a number of passengers trapped, and rescue workers quickly tried to extricate them while paramedics administered treatment on the scene.