Reshet Bet: Despite law, minorities continue to be underrepresented in government offices

Both the National Council for the Prevention of Road Accidents and the Israel Securities Authority did not employee any Ethiopian Israelis or Druse last year, the report reveals. 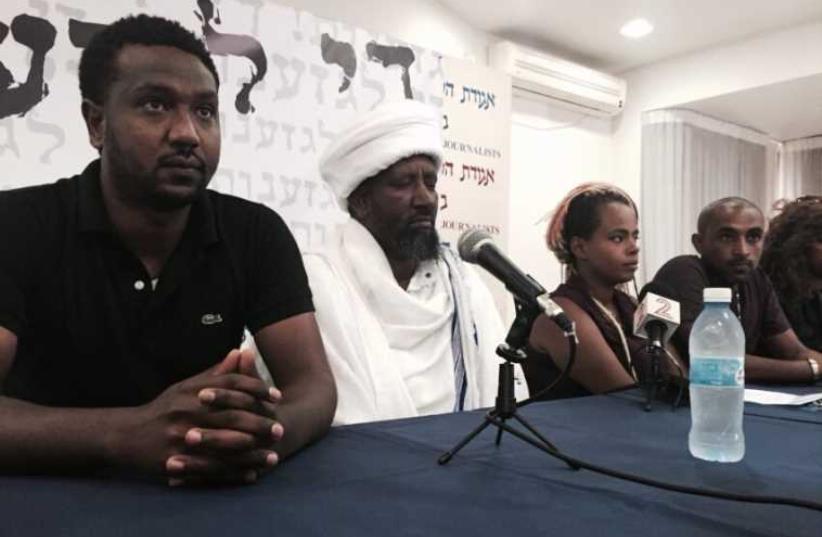 Israeli-Ethiopian leaders press conference
(photo credit: ALONI MOR)
Advertisement
Ethiopian Israelis and Druse are underrepresented in government offices despite the law that demands adequate representation for minorities, according to a Reshet Bet report published on Monday.Both the National Council for the Prevention of Road Accidents and the Israel Securities Authority did not employee any Ethiopian Israelis or Druse last year, the report revealed.Ethiopian Israelis make up some 1.5 percent of the general population.In the Council for Higher Education and the IBA, Ethiopian Israelis make up less than 1 percent of the workforce. In the National Insurance Institute, they make up about 1.5% of the workforce; in the Antiquities Authority they make up nearly 4% of the workforce; and in the Airports Authority, they make up some 3% of the workforce.Druse make up some 1.7% of the general population. At the Airports Authority and Magen David Adom, Druse make up less than 1% of the workforce; at the National Insurance Institute 1.5% of the workforce; at the IBA more than 1% of the workforce; at the Israel Nature and Parks Authority 3% of the workforce; and at the Israel Sports Betting Board (Toto) nearly 4% of the workforce.The Transportation Ministry responded saying that the allegations were unfounded, as the acting chairman of the board of directors of the road safety council is of Druse origin.Additionally, according to the ministry, the road safety council is made up of some 50 employees, of which three are from minorities backgrounds.Fentahun Assefa-Dawit, the executive director of Tebeka – Advocacy for Equality and Justice for Ethiopian Israelis, an organization that has been working on this issue for years, spoke with The Jerusalem Post on Monday to discuss the underrepresentation of Ethiopian Israelis in the workplace.“We are talking about half a percentage in most government and public offices – that is the best-case scenario. Sometimes nothing at all – that is the worst-case scenario,” he said of the representation of Ethiopian Israelis in government ministries and offices.According to Assefa-Dawit, not only do the numbers reflect poorly on the diversity in the offices, but they don’t even tell the whole story.Many of the offices, he said, try to be “smart” and trick the system by hiring Ethiopian Israelis as cleaners or other support staff with low-paying jobs. Moreover, the majority of these workers are contract workers and the companies that act as middle-men fire and hire them regularly to avoid having to pay the employees full benefits.The Interior Ministry, the ministry that regulates this issue, has “zero, nil [Ethiopian Israeli] workers in that office,” said Assefa-Dawit, a fact he said was very frustrating.After much work on the part of Tebeka, Assefa-Dawit had a meeting with the ministry in March to discuss the issue, but as it was during the election period, no minister was present.“They have engaged with us with some seriousness,” he said of the Interior Ministry, adding that he had been to meetings since then at the relevant offices.Assefa-Dawit said that the law requiring adequate representation for minorities in government offices is to help them integrate into the workplace.“Sometimes it is the chicken and egg situation,” he said.“If you don’t have the experience, no one will hire you, but if no one will hire you, you don’t get the experience.”When Ethiopian Israelis are constantly turned down from jobs, said Assefa-Dawit, they stop applying to these kinds of jobs. The purpose of the law is to make sure that they don’t get turned away, that they can get the experience necessary for the workplace, and to make sure they are not discriminated against.Once someone is turned down time and again from the job they are qualified for, explained Assefa-Dawit, they often end up taking a job outside their field and one they are over-qualified for, just to make ends meet and take care of their families.“When you start working somewhere, the temporary tends to become permanent. It’s a vicious circle that is hard to get out of,” he said.Assefa-Dawit pointed to the Israel Electric Corporation as a beacon of hope for the Ethiopian Israeli community.“You see representation of Ethiopian Israelis in all positions,” he said, including management, engineering, technicians, and more.These are permanent workers with better conditions such as secure retirement benefits, he added.He also mentioned some hi-tech companies that have affirmative action of their own accord, and “all of a sudden they find out that Ethiopian Israeli employees are not less in terms of their performances than any other [employees]”, he said.Assefa-Dawit also mentioned the test done by Tebeka, where they sent identical resumés to companies, some with Ethiopian names and some with Ashkenazi names.Only the resumés with Ashkenazi- sounding names received responses.“This is the situation. It is a very difficult situation which we are working very hard to change,” he said. It’s an issue he will address in the Knesset this coming week and in a meeting with Prime Minister Benjamin Netanyahu later this week.