Reshet pulls out of slated merger with Channel Ten

The Reshet board of directors is expected to meet in the next few days to formally cancel the planned merger, and continue the channel’s planning for the coming years. 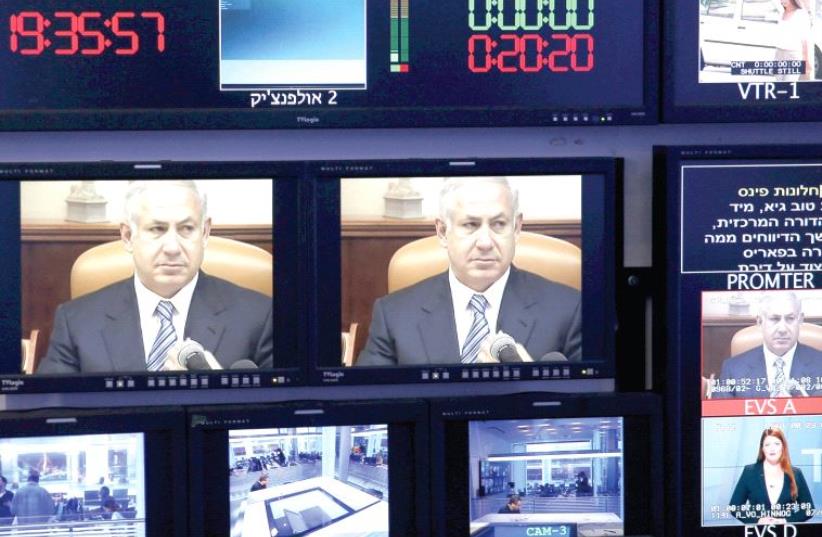 Prime Minister Benjamin Netanyahu, seen here on the monitors at Channel 10 News before an interview last year
(photo credit: REUTERS)
Advertisement
Four months after signing a merger agreement with television station Channel 10, shareholders of Reshet pulled out of the deal on Monday.The merger, which was approved by the Israel Antitrust Authority in August and threatened to once again shake up the Israeli television market, will no longer go through, with shareholders blaming unnecessary delays caused by the Second Authority for Television and Radio.“A company is unable to operate over the course of time in a state of uncertainty, all the more so when a television channel is required to plan future productions and more,” said a statement by Reshet shareholders.“Given the delays and foot-dragging by the Second Authority in its decision to hold a hearing – which will in practice take many months – and without hearing any positive comments regarding the correctness of restructuring the television market, the meaning of the conduct of the authority is straightforward: thwarting the merger.”Responsible for issuing licenses for commercial television and regional radio stations, the Second Authority’s approval was a necessary requirement for the merger to proceed.In November 2017, after almost 25 years on the air, Channel 2’s two broadcasters – Keshet and Reshet – split, and each began airing 24/7 on channels 12 and 13 respectively, while Channel 10 moved to 14. But the split was rough on the TV market as a whole, and all of Israel’s commercial networks have posted losses since last year.Since the split took effect last year, the three commercial stations – Keshet, Reshet and Channel 10 – all sustained losses of millions and sometimes tens of millions of shekels per month, which will amount to more than NIS 200 million in one year, according to Globes.The Reshet board of directors is expected to meet in the next few days to formally cancel the planned merger, and continue the channel’s planning for the coming years.“On a personal note, I wish to mention that the period of dialogue with Channel 10 employees, its management and the workers of ‘News 10’ was characterized by respectful discourse, including mutual appreciation for the television work of the companies,” Reshet CEO Avi Zvi told employees in a message on Sunday.“I am thankful to employees of Channel 10 and Reshet 13 on the maturity and responsibility that they have shown during the long period of uncertainty that we have experienced,” Zvi said.

Amy Spiro contributed to this article.
Advertisement
Subscribe for our daily newsletter