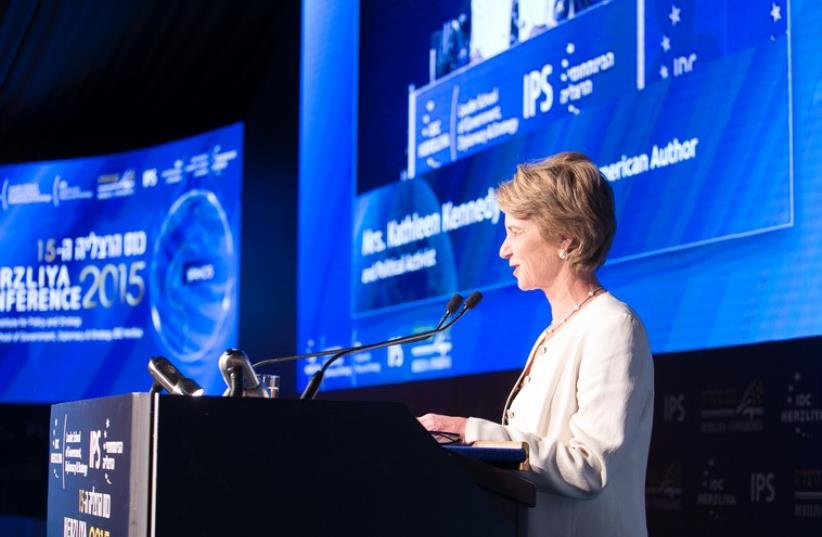 KATHLEEN KENNEDY TOWNSEND addresses the Herzliya Conference at IDC Herzliya on Tuesday
(photo credit: IDC)
Advertisement
As a war correspondent for The Boston Post during Israel’s War of Independence, Robert F. Kennedy saw the country as a beacon of hope in a world turned asunder after World War II.It was his firm commitment to Israel’s right to exist and America’s obligation to support its greatest friend in the Middle East that led Palestinian Sirhan Sirhan to assassinate Kennedy in the midst of his run for the White House 47 years ago.To mark the anniversary of his assassination on June 6, 1968, his daughter, Kathleen Kennedy Townsend, came to Israel to pay tribute to his legacy and everlasting commitment to peace at the annual Herzliya Conference at the IDC.“My father was killed for his support of Israel, so I’m speaking as someone who loves Israel and I want it to thrive and prosper and do well,” Townsend told The Jerusalem Post in an interview Sunday after she delivered the first of her two addresses to the conference.Quoting her father’s dispatches from the war, she said during her speech, “‘They will fight with unparalleled courage. This is their greatest and last chance. The eyes of the world are upon them and there could be no turning back.’ “He saw a people’s determination, not only to survive, but to repair a world which he knew perhaps more intimately than anyone...was horribly broken,” she said. “My father was a fighter who loved the underdog, and in 1948, the Jews were the underdogs.”A lot has changed since Israel’s inception, though, and according to many of Israel’s critics, David has now become Goliath in the conflict of the Middle East.Townsend, for her part, is reluctant to say what her father would think about the Israeli-Palestinian conflict if he were alive today.“I am very suspicious of saying what my father would say, that’s a difficult thing to do,” she said carefully, before adding her own thoughts on the matter. “I think there needs to be a negotiated settlement and a two-state solution.”The perceived persistent settlement building of Prime Minister Benjamin Netanyahu’s government, despite international condemnation, for example, is a matter that has confounded the former lieutenant-governor.“You have to have a vision, and without a vision, people perish,” she said. “I think that vision really does entail not building more settlements. I think it’s very disturbing that they continue to build settlements in territories that are supposed to be part of what would be part of a Palestinian state.”The issue of settlement building is a major point of contention between Netanyahu and President Barack Obama and serves as one of the many reasons behind the much-publicized tension between the two leaders.When looking to 2016 and asking if she thinks a new US president might help alleviate some of that tension, Townsend is not optimistic.“I mean, if you’re going to continue to build settlements, why would the tension go away?” she asked rhetorically.Her father worked closely with his brother John F. Kennedy during his presidency to ensure that the United States formed a lasting commitment to Israel. Kennedy’s legacy, then, is very much entwined with the unbreakable bond between Israel and the United States.“RFK was part of a long line of American leaders shaped by the events of the mid-20th century who deeply admired Israel’s courage, the tenacity of its people and the strength of their democracy. Especially, its democratic values even amidst its extreme security challenges,” US Ambassador Dan Shapiro said on Tuesday during a panel dedicated to Kennedy’s memory.“I stand here, today, in solidarity with those of you who have lost family and friends in the fight for Israel. We are joined by tides of history, of kinship and of love that touched millions of citizens in both our nations and in this room today,” she said A staunch Democrat, she stood firmly behind president Obama’s commitment to Israel and said, “When the people of Israel feel themselves alone, it is a good reminder that no American administration has been more supportive of Israel in its military support and defensive cooperation than this one under president Obama.”Townsend saw firsthand how Israel was gripped by terror during a two-week visit in 2001 during the second intifada.“The historic Israeli sites where buses of tourists eager to see where Abraham lived and Jesus walked were empty and silent as many canceled their trips, anxious for their safety,” she said.Townsend is an accomplished activist and politician in her own right; she served as a Maryland’s lieutenant- governor from 1995 to 2003 during which time she spearheaded many anti-corruption and community outreach initiatives. Currently, she’s an adjunct professor at Georgetown University’s Public Policy Institute and is the chair of Correct the Record, a pro-Hillary Clinton political action committee.On a personal and lighter note, Townsend revealed in conversation with the Post that her father’s love of Israel also played a pivotal role in her personal life.During her father’s time in Israel he had held a torch for her aunt but, much to his dismay, he learned that she married someone else while he was in Israel. And, so, Kennedy married Townsend’s mother, who was his second choice.“In a way, the war of 1948 gave birth to not only Israel, but to me!” Townsend chuckled.