‘I feel unsafe the whole time... but there’s no alternative,’ says passenger. 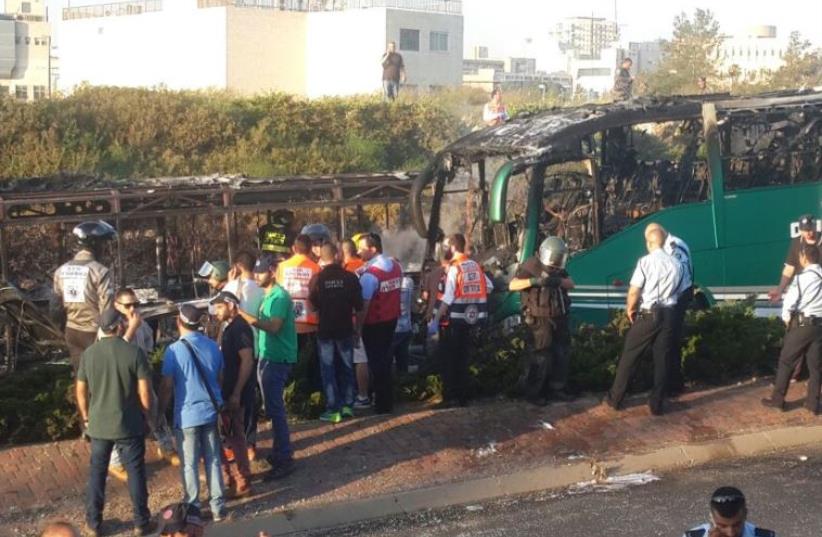 Scene of exploded bus in Jerusalem, April 18, 2016
(photo credit: MARC ISRAEL SELLEM)
Advertisement
For two passengers on the No. 12 bus on Tuesday, yesterday’s bombing evoked dark memories of the 1990s and early 2000s, when buses exploded with horrifying regularity.For another, yesterday was perhaps a close brush with disaster.Traveling from Armon Hanatziv neighborhood in the direction of the Malcha Mall on Tuesday afternoon, Shoshana Huja, 65 and a resident of Gilo, said she takes the No. 12 every so often. Today happened to be just such an occasion, but she says she had second thoughts about getting on.“Of course I was afraid of getting on the bus,” she said, laughing nonetheless from her position at the very front of the vehicle. “But I sat right here behind the driver so I could see exactly who’s getting on.”Huja was one of several passengers who said that they were looking around the bus as they got on, and when others got on, and most said that their feeling of personal safety had declined during the recent months of terrorist attacks, and especially the bus bombing on Monday.“I feel unsafe the whole time, whenever I get on a bus and I see an Arab woman with a head-covering and a bag I’m afraid,” Huja continued, saying however that she never thought about not getting on the bus since “there’s no alternative,” adding that taxis were too expensive for her to consider.The bombing on Monday stirred unpleasant memories for her however, noting that her neighbor is a widow of a victim of the No. 32 bus bombing in 2002, and that her colleague lost a son in one of the bombings on the No. 18 bus in the mid ’90s.“But there have been terrorist attacks for many years, it’s not anything new,” she said.Ronald Basford, 66, who has lived in Israel since 1968, also said he never considered not getting on the bus, but like Shoshana, said he is more aware and looks at his surroundings carefully to see who is on the ride with him.“You can’t generalize though, you can’t see every Arab as a terrorist. In parallel, there is increased security today and there is increased awareness, but its impossible to stop everything,” he said stoically.“But I’m not going to stay home because of this, although I wont take unnecessary risks. I won’t go wandering around an Arab neighborhood for example.But you have to keep going about your own business, you can’t give into it. You have to go on with life, and you have to hope for the best.”Sahar Levi, 19, happened to be on his way home yesterday, instead of traveling in the other direction, as he said he does frequently in the afternoon.Shortly after the attack, he got a flood of calls and text messages from his family asking him where he was and if he was alright.“ I was in shock, I really thanked God I wasn’t on the bus,” he said simply. “This afternoon I thought about not getting on, I can’t say I wasn’t afraid, but I also didn’t really think about not getting on. These things happen, what can you do? These attacks can’t be stopped at the moment, so I recommend that everyone continues on with their lives and shouldn’t be afraid.”