Israel Air Force is fusing manned and unmanned intelligence missions in order to complete the puzzle. 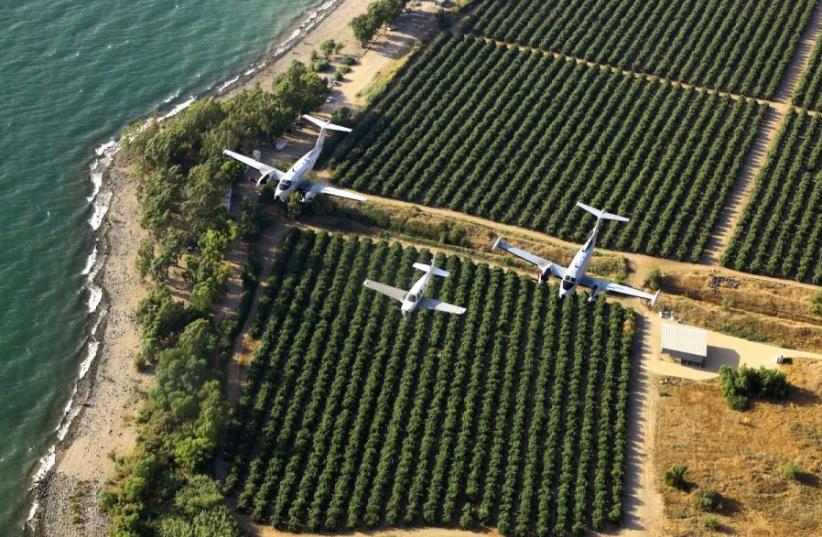 Planes from Israel Air Force's aerial intelligence squadrons in the air
(photo credit: IDF SPOKESMAN’S UNIT)
Advertisement
The Air Force’s reconnaissance aircraft have been flying more intelligence missions in light of rising threats along Israel’s borders and the continuing wave of Palestinian violence in the West Bank.The small and unassuming Sde Dov Airport is tucked between the city’s Tel Aviv Port and the Ramat Aviv neighborhood, taking civilians away on vacation. But the hybrid civilian/military airport is also where the air force’s First Squadron planes is based, and took off to fly at least 6,000 hours in 2016 alone.“We are living a historic decade, where everything in the Middle East is changing; the superpowers, the local powers, and religious powers are all changing,” a senior IAF officer told The Jerusalem Post this week. “What happened in 2010 across the Middle East, you can call it the ‘Arab Spring’ or now the ‘Arab Winter,’ but I call it ‘50 Shades of Black,’” he said, referring to the jihadist groups across the region.The First Squadron and the Kings of the Air Squadron execute reconnaissance missions using the Beechcraft-200 “Zofit,” Beechcraft King Air C-12 “Kukiya” and Beechcraft A-36 “Hofit” aircraft. The planes are versatile, gathering both visual and signals intelligence, with advanced cameras and electro-optic sensors installed on their underbellies, making them some of the most advanced manned surveillance aircraft in the world.The intelligence gathering planes of the squadrons take off several times a day and operate alongside other units of the IAF, such as the Unmanned Aerial Vehicle and Helicopter divisions. According to the senior officer, these planes, alongside the UAV drones, are vital to Israel’s intelligence gathering capabilities, “making our part of the puzzle as clear as it can be.”While some weather conditions hinder the cameras’ operation, intelligence gathering missions take place at all hours of the day, with several reconnaissance planes in the air at all times.“Israel is a UAV superpower, one of the best in the world,” he said, emphasizing that “the fusion of UAVs and piloted aircraft gives Israel the best possible intelligence coverage. We are able to get the best intelligence for the country’s leaders, so as to enable the best decisions in a region which is filled with upheaval.”One of the main challenges for the next generation of pilots is to train for the next war, which will be completely different than in the past, the senior officer said.“We cannot ignore what is going on around us. Each side is learning, and therefore we must not only stay one step ahead of our enemy, but be a hundred steps ahead of the threat we think the enemy might pose,” he said.“We are very adaptive and rational in facing regional developments, and revolutionary action is being taken to keep our qualitative military edge.”The IAF’s first operational mission took off from Sde Dov Air Base in December 1947 to rescue a wounded soldier south of Beersheba. In 2019, the base is set to close and be moved to Hatzor Air Base near Ashdod, a move praised by the officer, who said that the move would be an improvement for the air force.“I’m very enthusiastic about the move; operationally it’s better, there are longer runways and it’s not hybrid.While there may be logistical issues at the beginning, in the end the air force will have better operational capabilities,” the officer summed up.