Rivlin at Remembrance Day ceremony: We have been fighting the war of our independence for 68 years

Rivlin emphasized the importance of the role of the IDF in the security and survival of Israel. 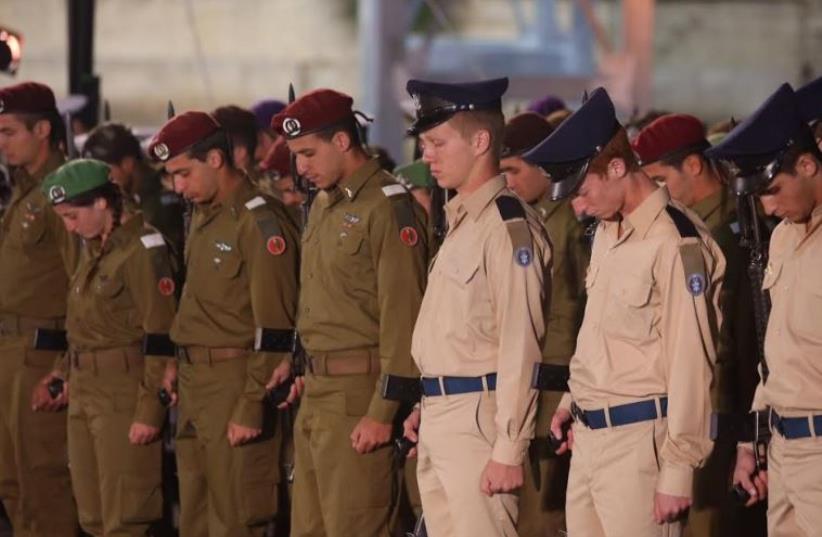 Remembrance Day ceremony at the Western Wall.
(photo credit: MARC ISRAEL SELLEM)
Advertisement
President Reuven Rivlin spoke at a ceremony at the Western Wall in Jerusalem on Tuesday night in honor of Remembrance Day.
Rivlin gave a moving speech about the heavy price that the whole nation pays to ensure the safety of the Israeli people. "No one planned to die. Fathers and mothers, sons and daughters, brothers and sisters, grandmothers and grandfathers, I stand before you and my heart breaks for children you lost. Your loved ones, the flowers of your hope."
Rivlin eulogized the fallen soldiers, saying: "Your time to love was cut short, so we will love in your place. You didn't have enough time to accomplish your dreams, so we will accomplish them in your name."
Rivlin also emphasized the importance of the role the IDF plays securing the survival of the country and its future. "The IDF is not just our army, it is all of us as a whole. Secular and religious Jews. Arabs and Circassians, city-dwellers and kibbutznikim."
The president concluded his speech by highlighting the complicated nature of the Israeli people, "We are not a people of war. We did not go to battle thirsty for war. We are a nation that loves peace, loves life and hates war. You paid the heavy price necessary this nation pays in order to defend the lives of its citizens and its independence."
The memorial candle-lighting ceremony started at 8 p.m. after a siren sounded throughout the nation.
A two-minute siren will wail nationwide at 11 a.m. Wednesday, marking the start of memorial ceremonies at the country’s 52 military cemeteries.
The official state memorial ceremony will begin at that hour on Mount Herzl in Jerusalem, led by Rivlin, Netanyahu and Eisenkot. At the same time, the Kiryat Shaul military ceremony in Tel Aviv will host a memorial event led by the defense minister.
At 1 p.m., Rivlin and Eisenkot will lead a memorial ceremony at Mount Herzl honoring the victims of terrorism.
The Defense Ministry expects some 1.5 million Israelis to visit military cemeteries across the country throughout Wednesday.
Magen David Adom will station 132 ambulances at the graveyards.