Rivlin said that when he presented his partnership vision of a shared national identity last year, it caused a lot of controversy, and he was even accused of being a post-Zionist. 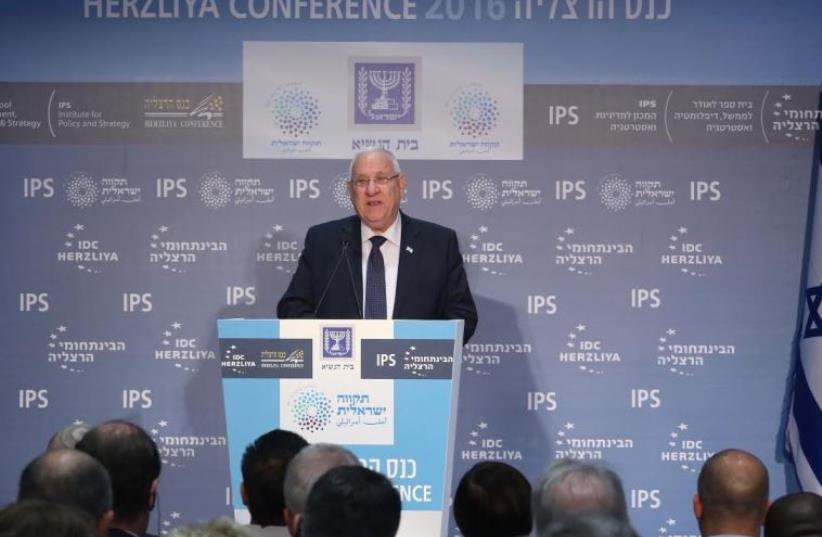 President Reuven Rivlin speaks at the 16th annual Herzliya Conference
(photo credit: MARC ISRAEL SELLEM)
Advertisement
Israel has undergone a cultural and demographic earthquake, President Reuven Rivlin told participants in the 16th annual Herzliya Conference on Tuesday, reiterating what he said a year ago when he called for a new Israeli agenda.Contrary to previous practice, the conference started not in Herzliya, but in Jerusalem at the President’s Residence.World Jewish Congress President Ronald Lauder said in his speech that education is a bedrock value for the resilient, diverse and pluralistic country.“Israel is a light onto the nations, the only place with the values needed to develop and implement a plan of such soaring ambitions,” he said.Rivlin said that when he presented his partnership vision of a shared national identity last year, it caused a lot of controversy, and he was even accused of being a post-Zionist. To those who ascribe to such a view Rivlin said: “I want to say today I am a Zionist because I believe in the need and the moral right for a home and a nation state for the Jewish people. I am a Zionist because I believe that the establishment of the State of Israel is the purest expression of the return home of the Jewish people to its history, to its responsibility and to its destiny.”For all that, he recognized and accepted that not everyone who lives in Israel is or should be a Zionist.What he wanted for all Israelis was a shared hope for equal opportunities and equal rights to education, to social services, to academia and to employment.Only when such equality exists, believes Rivlin, will Israel be able to forge a new inclusive national identity, in which the four tribes – secular, Modern Orthodox, Ultra Orthodox and Arab – can maintain their lifestyles and traditions, but can come together under a national umbrella.Rivlin commended Education Minister Naftali Bennett for understanding this and making significant changes in the education system.Bennett said that he had already introduced the study of Hebrew for Arab children at the kindergarten level instead of grade three as had been the case till recently. He also regretted that when he had been a yeshiva high school student that he had not been exposed to the rich Sephardi heritage and that the few Sephardi youngsters who had been accepted at his school had been forced to adopt Ashkenazi customs.Interior Minister and Minister for the Development of the Negev and the Galilee Arye Deri stressed that unity rather than isolation must be the Israeli watchword. Congratulating Rivlin, he told him: “you did a great thing in diagnosing the ills of Israeli society. Too many people are afraid or unwilling to face reality.” Deri also advocated the importance of finding something new to unify the different segments of Israeli society.Ayman Odeh, head of the Joint Arab List drew the most applause when he argued for adopting a different attitude toward the Arab sector. Building citizenship through partnership would be beneficial to the whole country he said, and stressed the significance of focusing on mutual interests rather than trying to overcome points of contention.He cited as an example the fact that Arabic is one of Israel’s official languages.But if it wasn’t he said, and he came to the Knesset with the proposal that Arabic should be accepted as an official language, 60 MKs would turn on him and say: ‘This is a Jewish state. Why do we need Arabic as an official language?’ Odeh suggested that it would be easier to start a dialogue about economics because economics affect everyone.“When the quality of life of the Arab sector is improved, it will affect not only Arabs but the whole national economy,” he said. While agreeing with Rivlin on most points, Odeh, said that there had been a serious omission in that no mention had made of the Palestinian Arabs living in the West Bank and Gaza Meretz chairman Zehava Gal-On concurred saying: “the Palestinians influence our lives, just as we influence theirs.”Gal-On also introduced a sour political note with a virulent attack on Prime Minister Benjamin Netanyahu who she charged does not really care about the Ultra-Orthodox or Arab populations.Supreme Court President Miriam Naor said that the partnership that Rivlin envisages can work only in a true democracy in which the judiciary is independent and the rule of law prevails.