President Reuven Rivlin lamented that many Israelis "still do not see strengthening the relationship between Israel and the Diaspora as an issue at the root of the existence of the Jewish people." 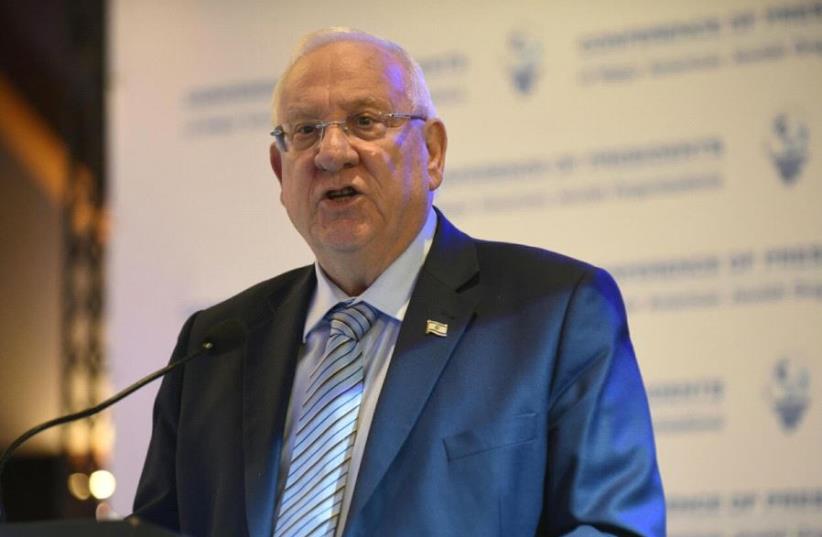 Rivlin speaks in Jerusalem at the Conference of Presidents of Major American Jewish Organizations
(photo credit: AVI HAYUN)
Advertisement
Although he relegated it to the tail end of his address in Tel Aviv to the opening session the Makor Rishon Conference on “Thinking Differently,” President Reuven Rivlin on Tuesday, whether intentionally or unintentionally, opened a Pandora’s box on the true nature of relations between Israel and Diaspora Jewry.“Many of us still do not see the strengthening of the relationship between Israel and the Diaspora as an issue at the root of the existence of the Jewish people, a mission which is part of our duty to the State of Israel as a the state of the Jewish people,” he said. “If we are to tell the truth, Israeli Jews see the Diaspora Jews as reinforcements for aliya, or to be blunt, a deep pocket.“This challenge is not just one for our brothers and sisters in the Diaspora to deal with. It is a challenge for Secular Zionism, it is a challenge for the haredi (ultra-orthodox) community, and it is a challenge for the National Religious community and, among them, National Religious haredim and their leaders.”Infusing, as always, his belief that Israel is made up of four tribes that need to be unified more on a common denominator than under a common umbrella, Rivlin referred to Diaspora Jewry as “the fifth tribe” in what he called “a shared Israelihood.”In this context, Rivlin referred to how Jews in Israel relate to those elsewhere in the world and recalled the only time he remembered being hit by his father: “Close family had arrived on a visit from the US, and I asked them why they did not immigrate to Israel. And I added: ‘You see, Hitler will still get to you.’ Then my father hit me."“That slap made me understand that at the root of the relationship between the different parts of the Jewish people – wherever they may be – needs to stand on one simple mutual demand: the demand for mutual responsibility, a commitment to the security, freedom and well-being of my people. This demand to care, to be concerned, in a way that only occurs in a family, forces us to be greater than the sum of our parts.“We cannot allow a harsh disagreement between us – and it is truly difficult, it is difficult also for me – to erode the very idea of the Jewish mutual responsibility. We have a challenge to place this relationship as a supreme value beyond debate – an axiom,” Rivlin said.While Rivlin said he saw the controversial conversion issue and question of who has the right to dictate the protocols of prayer at the Western Wall as two separate problems – each of which can cause a greater rift among the Jewish People – he also voiced regret that the whole process that had been conducted in accordance with the ways of Hillel had been thwarted by the harsh attitudes of those who walk in the ways of Shamai.The process could have strengthened the Jewish people had it been implemented, he said, predicting that “over time, we will not be able to escape from returning to the table, to, responsibly and with consideration, arrive at an understanding on the issue of the Western Wall.”While he believes this is both essential and possible, Rivlin said he doubted a mutual understanding could be reached on conversion.