President: The light Israel spreads – not just at Hanukka, but every day – will overcome the darkness of extremism, violence, and terrorism 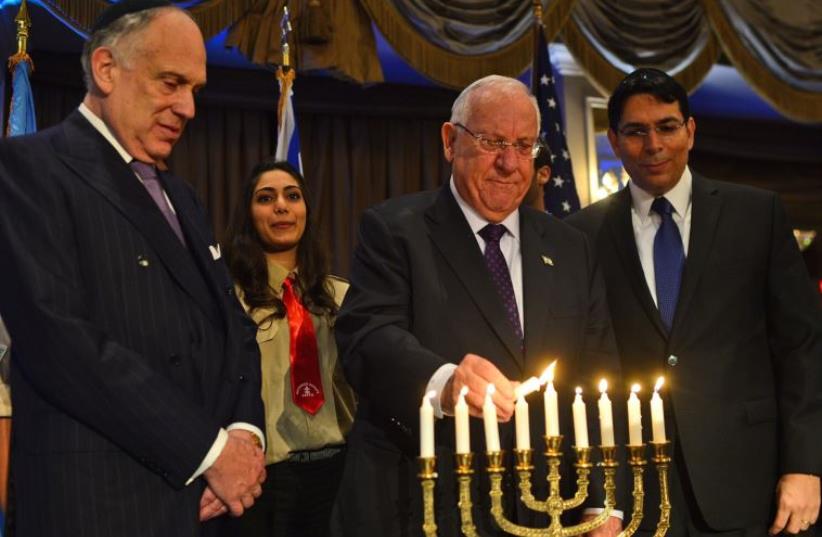 Reuven Rivlin lights 8th Hanukka candle with Danny Danon and Ronald Lauder
(photo credit: KOBI GIDEON/GPO)
Advertisement
President Reuven Rivlin attended a candle-lighting ceremony for the last night of Hanukka Sunday night in New York. The annual Hanukka Festival of Lights event was hosted by World Jewish Congress President Ronald Lauder and the Permanent Mission of Israel to the UN, led by Ambassador Danny Danon, and attended by permanent Representatives to the UN from dozens of countries, diplomats, and senior members of the Jewish community.According to the WJC, this year’s event, themed “turning darkness to light,” was both a chance to celebrate Hanukka and an opportunity for the UN and the international community to stand together to fight the darkness that was cast upon the world by the terror attacks in Israel, France, the United States and elsewhere.At the event, Rivlin said at Hanukka, the past is remembered as the world faces the future."This year, the UN adopted new development goals for the next 15 years. And just last week, Israel set out its goals, to help with development in technology and agriculture in developing countries," he said."Israel is all too often the target of politically motivated attacks in the UN. But we insist on presenting our views, even as the few against many, in the belief, that the light Israel spreads – not just at Hanukka but every day – will overcome the darkness of extremism, violence, and terrorism. Hanukka's main message is the victory of light over dark." 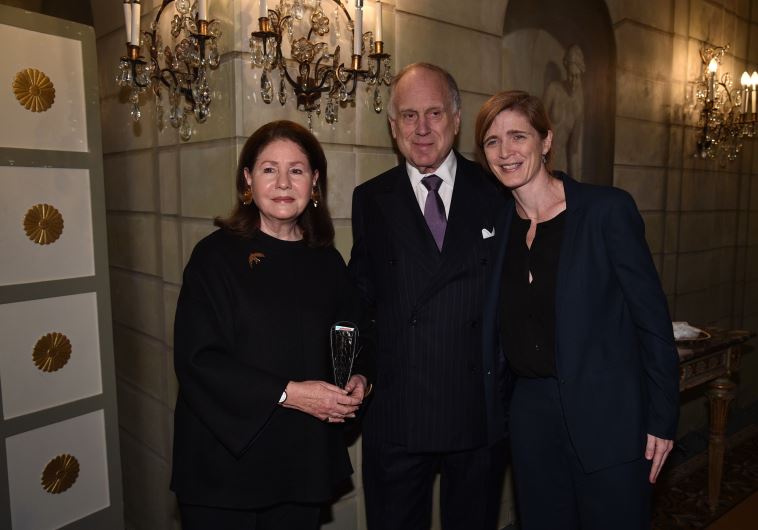 Samantha Power (right); Ronald Lauder (center); his wife Jo Carol Lauder (left) (photo credit COURTESY)Danon dedicated the candle that he lit to the memory of IDF soldiers Staff Sergeant Oron Shaul and Lieutenant Hadar Goldin who died in Operation Cast lead and added that he prayed "that we can bring them to a proper burial in Israel as soon as possible." Lauder, who also lit a candle, added that Hanukka has a timeless message. "By creating light on one of the darkest nights of the year, it kindles our strong desire to find a lasting peace in our world," he said.The event concluded with the musical performance of a Hanukka medley by 'One Voice,' a project that brings together the Tel Aviv Hebrew scouts music group and the Greek Arab Orthodox scouts orchestra of Jaffa.Samantha Power, The American UN Ambassador came specially to the event to honor Lauder, right after she gave her speech at a conference in New York. Power shared her points from her speech earlier with Mr. Lauder, and blessed him over the last candle.
Advertisement
Subscribe for our daily newsletter