Rivlin receives a message from a fallen soldier 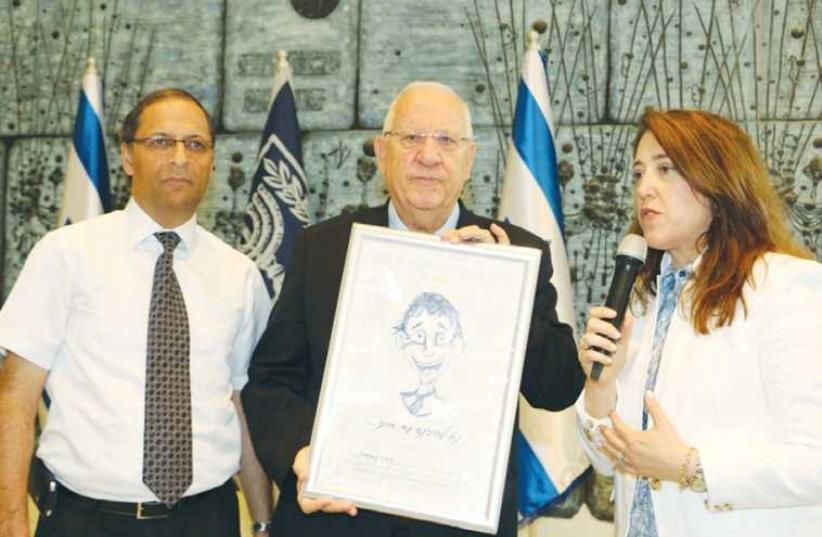 AMNON ELDAR and Debbie Isaac of Amit present President Reuven Rivlin with the plaque at the President’s Residence in Jerusalem
(photo credit: COURTESY AMIT)
Advertisement
A message from Givati Brigade Lt. Hadar Goldin, who was killed in action in Gaza during Operation Preventive Edge last summer, was delivered on Tuesday to President Reuven Rivlin by Debbie Isaac , the president of Amit (formerly Mizrachi Women’s Organization of America) and Amit Director-General Amnon Eldar.Goldin was a student at the Amit Science and Technology School in Ra’anana. He had designed a plaque for his door that read: “Please enter with a smile.”Isaac told Rivlin that Goldin’s family wanted the plaque, which she had seen in their home, to be displayed in a place where people could see it, and the most suitable location in their view was the President’s Residence.Goldin, 23, from the Givati Brigade’s Reconnaissance Company, was killed in the Battle of Rafah on August 1, 2014.Isaac introduced Rivlin to some 100 Amit Women, many of who came from the United States to join in the organization’s 90th anniversary celebrations and visit some of the 110 schools in the Amit network.When the organization was founded in 1925 by Bessie Gotsfeld , Isaac told Rivlin, Goldstein’s main concern was to provide education for children coming to the Land of Israel from Europe.Isaac was proud that when the first Ethiopian youngsters arrived in Israel in the mid-1950s, they were integrated into Amit Schools, and this policy of integrating children from all immigrant backgrounds as well as those from low socioeconomic backgrounds has prevailed throughout the years.The result according to Isaac is that 90 percent of Amit alumni serve in the IDF or perform civilian national service, and 83 percent have completed high school and passed their bagrut matriculation exams.“We have to invest a lot in Amit students to strengthen Israel’s society,” said Eldar.Rivlin explained that there are four school systems in Israel: haredi, state religious, state secular and Arab.All four systems must recognize one another and study one another’s ideas and intentions, said Rivlin. “Only then can we bridge gaps and create a new Israel.”He praised Amit for having a great tradition of Jewish education and for its education in general being of the highest level.