The president will meet Pope Francis in November. 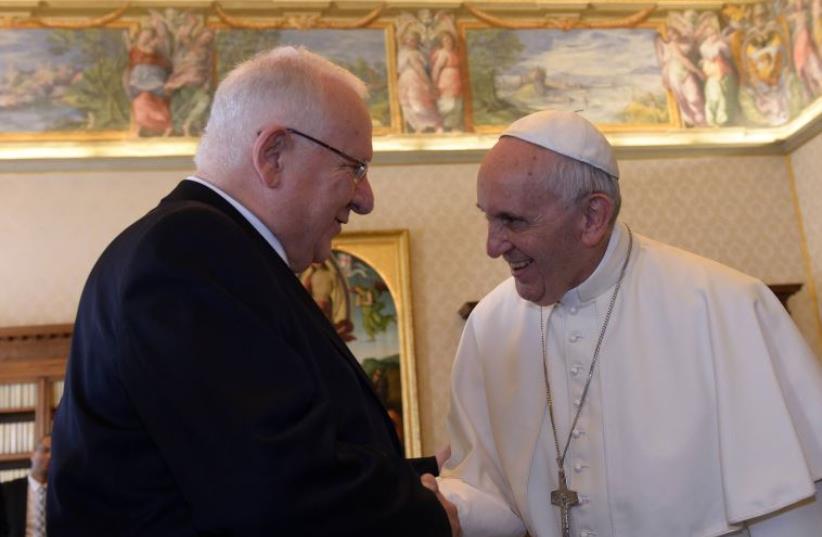 President Reuven Rivlin meets with Pope Francis for an official state visit at at the Vatican, September 2015
(photo credit: HAIM ZACH/GPO)
Advertisement
On November 15, for the second time in three years, President Reuven Rivlin will meet with Pope Francis at the Vatican. Rivlin previously met with the pontiff in September 2015. His predecessor Shimon Peres also met with the Pope on several occasions, the last time being in June 2014, a month before the completion of Peres’s tenure as president. At that time, he and the Pope were joined by Palestinian Authority President Mahmoud Abbas, and the three stood in the garden of the Vatican and prayed together for peace.Pope Francis had been Israel a month earlier and had been hosted  in Jerusalem by Peres, who had previously met Pope Benedict both at the Vatican and in Jerusalem. In fact, there is a tree in the garden of the presidential compound that was planted by Pope Benedict.Pope Francis also planted a tree in the garden of the President’s Residence, and subsequently planted an olive tree in the garden of the Vatican.Although relations between Jerusalem and Rome have improved greatly over the decades, largely due to the efforts of Rabbi David Rosen, the only Orthodox Rabbi to be conferred with a Papal knighthood, there are still significant issues of dispute.When US President Donald Trump announced that he was recognizing Jerusalem as Israel’s capital and transferring the American Embassy there, Pope Francis publicly expressed his opposition, saying that the city’s status quo should be respected, and called for all to respect the United Nations resolutions that pertain to Jerusalem. He stated that he could not keep quiet about his concerns that Trump’s decision would spark new tensions in the region.Rivlin, a seventh generation Jerusalemite, frequently reminds visiting dignitaries that King David established Jerusalem as the capital 3,000 years ago, and it is doubtful that either the Pope or Rivlin will be silent on the issue of Jerusalem when they meet in two weeks.When Francis visited Jerusalem, ill winds blew for Jews in Europe. On the day of his arrival, two Jews were killed in Brussels, and two other Jews were badly beaten when leaving a synagogue in Paris. Since then, there has been a sharp escalation of antisemitic hate crimes not only in Europe, but the United States, Australia and South America.That too will be a focal point in the conversation between the president and the pope.While in Rome, Rivlin will also have working meetings with Italy’s President Sergio Mattarella and Prime Minister Giuseppe Conte.Rivlin is due to return home on Saturday, November 17.