Rule of Law: If Guantanamo closes, are West Bank courts next?

On the surface, the US and Israeli military court system are wildly different, but the two do have one commonality: vociferous criticism calling for an end to their operations. 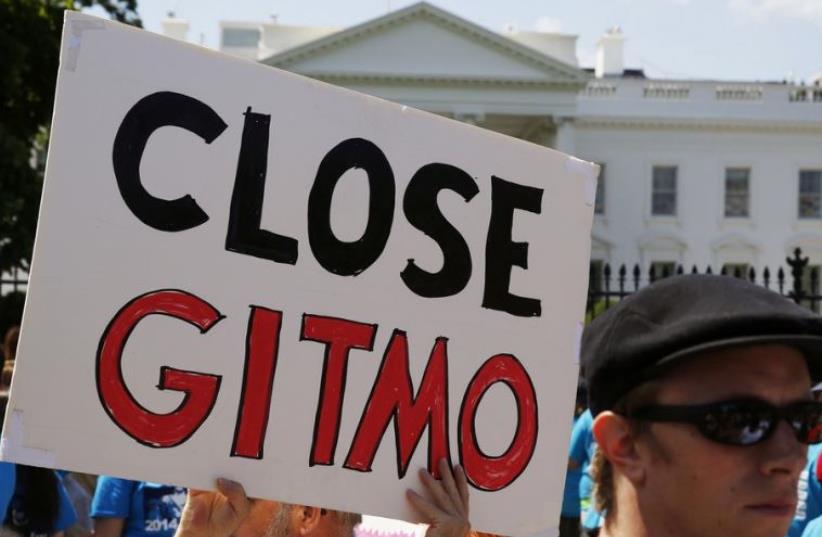 Activist holds a sign at a rally next to the White House in Washington calling for the closure of the US-run Guantanamo Bay prison in Cuba
(photo credit: REUTERS)
Advertisement
At first glance, the US’s Guantanamo Bay administrative detentions and its special military court system have little connection to the Israeli military’s administrative detentions and West Bank court system.The US military system is little more than a decade old and practically dropped out of the sky to handle a relatively small number of some of the most heinous suspected al-Qaida terrorists after September 11, 2001.In contrast, the Israeli military system is nearly 50 years old and was an outgrowth of the 1967 Six Day War in which Israel conquered the West Bank and had to provide a comprehensive criminal justice system for handling a wide range of Palestinian issues.One thing both have in common is they both face fierce global and internal criticism regarding their legitimacy and fairness.The allegations are that they depart from normal civilian justice system procedures, undermining the rights of defendants to a fair trial and blackening the US and Israeli brands.Could major changes at Guantanamo over the next year impact Israel’s West Bank courts? Guantanamo is under massive pressure of late to close.One of US President Barack Obama’s first actions as president in 2009 was to order a process for closing Guantanamo and moving all prisoners into a civilian justice or prison system.Congress has persistently fought this, but Obama continues to pursue ways to ship detainees off to other countries or slip them into US civilian courts, and last week leaked a plan to make a large transfer of detainees to foreign countries.The US military commissions flowing from the Guantanamo detainees have also generated heavy criticism.Ali al-Bahlul was convicted by a military commission in 2008 of performing media relations for Osama bin Laden, framed as a conspiracy to commit war crimes, and was sentenced to prison for life.However, Bahlul’s conviction was challenged on a range of arguments, including whether the charges against him were sufficiently war crimes-specialized to be tried by military commissions as opposed to civilian courts.His defense has argued in recent weeks that the conspiracy- media relations charges did not fall into the war crimes paradigm and that he should have the extra protections of a civilian jury, a tenure-protected civilian judge and other protections that are part of the civilian court system.At various points, other defense lawyers have accused the US of spying on the defense teams’ conversations, infiltrating their computers, using secret or illegally obtained evidence and otherwise stacking the scales of justice against the detainees.The same defense lawyers and their supporters have presented extensive evidence, including a 140-page report, that US civilian courts have successfully tried and convicted over 500 terrorists between 2001 and 2011, to show that military commissions and special detention outside of the standard prison system are unnecessary.Israel’s military West Bank courts are far more established, as is the criticism against them.The number of Palestinians in administrative detention has ranged widely over the years, but Deputy Attorney- General Raz Nizri recently announced that there are several hundred Palestinians in detention, and that number has been reached and passed many times.Israeli administrative detention is perpetually criticized, sometimes leading Israel to release detainees under public pressure, especially with certain hunger strikers like Muhammad Allan.Although the IDF likes to note that the default is for the West Bank court to follow Israeli civilian court procedure and evidence, there are crucial differences in some of these areas and some of the ways evidence is collected when the Shin Bet (Israel Security Agency) is involved in interrogations.Critics of the West Bank system could also note that Israel’s civilian courts try a large volume of terrorism cases, but their push is generally against any kind of Israeli judicial system (the “occupiers”) trying Palestinians (the “occupied”).What if Guantanamo finally closes, effectively ending administrative detention and fulfilling Obama’s eightyear- old pledge? What if US military commissions are finally thrown out as unconstitutional or some cases are thrown out as being better placed in civilian courts? Could that finally tilt the balance in delegitimizing Israel’s West Bank courts and administrative detention, especially in a time when the EU is delegitimizing the West Bank settlements at a whole new level with its labeling campaign? Probably not.As difficult as it might be for the US to close Guantanamo or transfer some detainees out of military commissions into civilian courts, it does not compare to the difficulties of altering the West Bank courts situation.First, the West Bank courts try not only terrorists but also try low-grade stone-throwing and even much lower-grade crimes like theft and illegally crossing into Israel. This is a huge system and the volume of cases dwarfs the number of remaining Guantanamo detainees by thousands.Second, there are international law problems with transferring Palestinians into Israeli civilian courts in terms of Palestinians being “occupied,” which is far more problematic than transferring Guantanamo detainees into US civilian courts.Put differently, if erasing Guantanamo and the military commissions could solve criticism of the US, there is no obvious solution (at least not in an era without Palestinian courts ready to try their own terrorists) that could fully resolve criticism of Israel.Some have also noted the historical differences, with Guantanamo having a less permanent feel, being a reaction to a specific post-9/11 threat, and the West Bank courts being a relatively permanent system evolving and sustained over decades despite perpetual criticism.In that light, while closing Guantanamo (thereby ending US administrative detention) or ending US military commissions may reflect poorly on Israel’s military court system, it is unlikely that any increased pressure will alter the playing field regarding Israel’s West Bank courts and administrative detention.