Hundreds from ‘Team AMIT’ to run in Jerusalem Marathon, raise money for children’s shelter aided by the late Daniella Moffson. 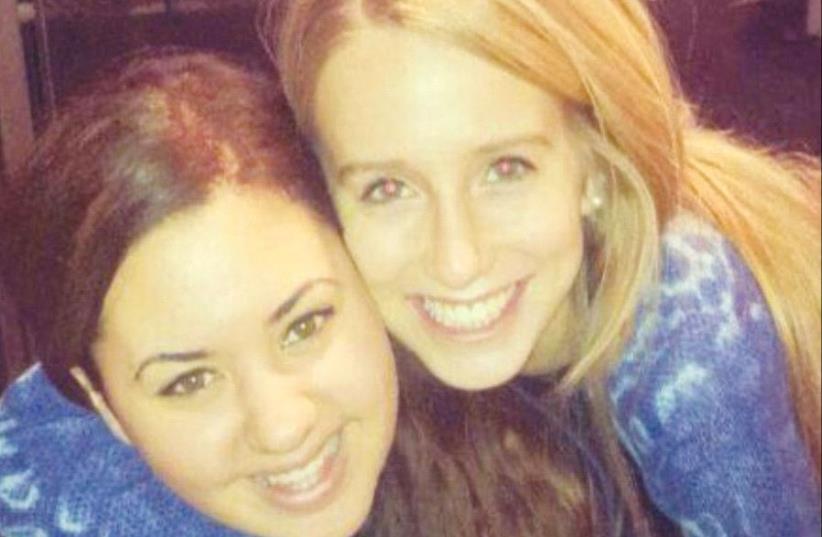 DANIELLA MOFFSON smiles as she holds her arms around the shoulders of friend Shirelle Cohen.
(photo credit: DANIELLA MOFFSON FOUNDATION)
Advertisement
In January of last year, Daniella Moffson, a 21-year-old Manhattan native and Barnard College student who spent her high-school gap-year in 2013 volunteering at a Jerusalem shelter for severely neglected children, died as she lived: giving.Indeed, at the time of her death, Moffson was volunteering in Honduras at Global Brigades, a program devoted to global health and holistic development.She was killed when the bus in which she was traveling plunged down a ravine, killing her and two other young volunteers.To honor her legacy, more than 300 members of “TEAM AMIT” – created by students at the Midreshet AMIT for girls in Gilo, where Moffson studied and volunteered at Beit Hayeled AMIT for foster children – will run in the Jerusalem Marathon on Friday to raise money in her name for the center.On Tuesday, Shirelle Cohen, a close friend of Moffson who served as a liaison between the 30-year-old children’s shelter and gap-year seminary program, recalled her first memory of Moffson.“I walked into a room and saw her crying,” Cohen said. “I asked her what was wrong, and she told me that she was just frustrated because she chose the program because she wanted to give her all to these kids, and she was having such a difficult time connecting with them, and it frustrated her so much.”“Daniella wasn’t the only one who was struggling, but she was the only one who cried about it, which tells you a lot about her,” she said. “She had the biggest heart I ever saw in a person.”Noting that Moffson “literally fought for their love,” Cohen said by the end of her time volunteering with the children, her friend had broken through.“Everyone had a hard time saying good-bye to her, and she had a hard time saying good-bye to the kids,” she said. “Daniella was so invested – she showed up every day at the same hour she was supposed to come and stayed there even when the kids were not welcoming, or were in a bad mood. She was very dedicated.”On Friday, for the second year, students from the AMIT schools and seminary program, will run in different marathon events to raise funds for the children’s shelter Moffson served.“We decided that we wanted the money raised to go in Daniella’s name because it was a project that was so close to her heart,” Cohen said. “She passed away last year, and we ran for her then and said, of course, we are going to do it again. There was no question about it.”Ilana Gottlieb, director of the Midreshet AMIT in Jerusalem and Moffson’s teacher during her gap year, said her student provided invaluable support and encouragement for some of Israel’s most neglected children, all of whom were removed from their homes by court order.“We started this fund-raiser in her memory to benefit the children because this is a cause that was important to her,” she said.Moreover, Gottlieb noted that the fund-raiser was also inspired because Moffson ran in the marathon four years ago with fellow gap-year students in the first Team AMIT fund-raiser for the foster program.Asked what distinguished Moffson as a person, Gottlieb cited her empathy and kindness.“Every student, every teacher and all of the foster kids loved her,” she said. “Some people are great with their peers; some people are great students; some people are great volunteers – Daniella was all of them. She was so well-rounded and a role model for the other girls. She was a quiet leader who led by example.”Following her death, the Daniella Moffson Foundation was created to promote the values and causes championed by Moffson, who had hoped to become a pediatric oncologist.