Running for the greater good 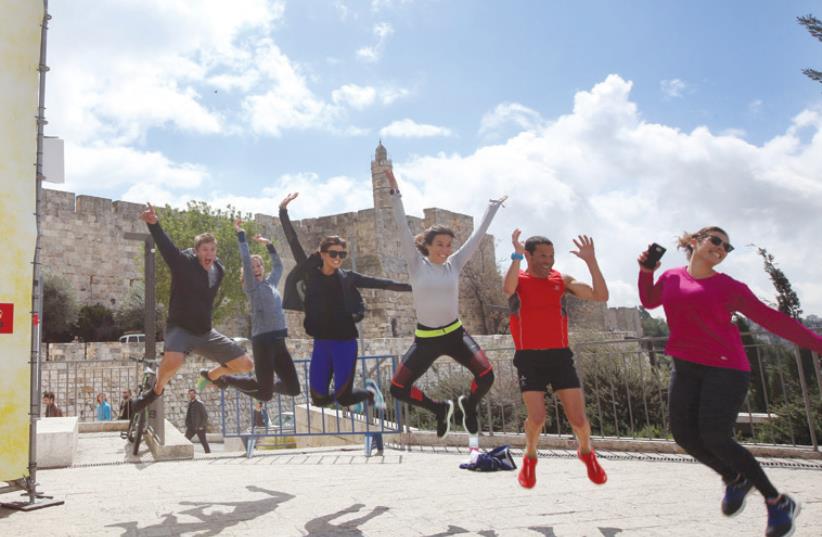 US ACTRESS Rachele Brooke Smith (third left) and friends get ready for the Jerusalem Marathon near Jaffa Gate yesterday.
(photo credit: MARC ISRAEL SELLEM/THE JERUSALEM POST)
Advertisement
For marathoners, the only thing more enjoyable than a runner’s high is running for the greater good.Among the 25,000 athletes from more than 60 countries participating in Friday’s sixth annual International Jerusalem Marathon are a gamut of runners hoping to raise awareness about a cause near to their hearts.While not all of them are jogging in the marathon itself, opting instead for the less strenuous half-marathon and 10K races, their common denominator is tikkun olam (healing the world).Among marathoners with a cause is Jerusalem resident Gabe Pransky, 35, who created the Association of Americans and Canadians in Israel’s Shira Pransky Project five years ago to honor his wife who died of Hodgkin’s Lymphoma in 2009 at the age of 26.Pransky has recruited 80 runners who have raised more than $25,000 for Team Shira, which works with the AACI to aid English-speaking olim in navigating the country’s healthcare system, and ensure they get the timely help they need.“When I introduce the project to anyone who has made aliya, I get a reaction almost immediately, and it’s always four words: ‘Wow! That’s really important,” said Pransky. “I have a very positive outlook on the healthcare system in Israel, and I think we have amazing resources here. I just think it’s a tragedy when people are not aware of the resources available to them,” added the Philadelphia native.To raise money for his cause, Pransky uses the group’s website ShiraPranskyProject.org to feature images of Team Shira’s runners, which donors can click on to make a contribution.As of Wednesday night, he said Team Shira raised $25,475.“I love our team because we get a great mix of people – a lot of people with an emotional connection to Shira and her story who are proud to be part of her legacy,” he said.“That group blends together with a group of people devoted to the cause, and to me that represents what I wanted to accomplish.I wanted to memorialize Shira, but the way I wanted to do that was to help the community with something positive coming out of our experience.”According to Pransky, the inspiration for this project came during his numerous reflections on the struggles that he and Shira faced during her illness, and the realization “that there were many more avenues of support that had not been utilized out of poor awareness.”Noting the many challenges English-speaking olim in Israel face, Pransky said it was important to him to ensure improved accessibility to support programs by promoting awareness and helping service providers reach the people that need them most.“This is a vulnerable immigrant population that is often overlooked when those in the support sector attempt to address awareness and accessibility,” he said, adding that the project “wants people to understand the system before a personal crisis hits.”“We can make navigating the system less intimidating when it matters most by improving the awareness of all English-speaking immigrants, not only those who are already struggling,” added Pransky.Meanwhile, Daniel Weininger, a 27-year-old counselor at the gap-year program the Hevruta Partnership in Global Jewish Learning and Leadership, said he and 30 students are running to support the organization Makom L’kulam, which champions the rights of disabled children.Makom L’kulam, meaning “a place for everyone,” was founded in 2010 by Yair and Nechama Cohen, both of whom have volunteered for years to raise funds to aid families of children with disabilities.Hevruta, a collaboration of the Shalom Hartman Institute and Hebrew College, is “the first fully integrated and balanced gap-year program for North American and Israeli student leaders from a diverse range of Jewish backgrounds and perspectives,” according to its website.Makom L’kulam’s mission is to “bring about a change in society’s perception of people with disabilities through education and culture,” which Weininger said complements the lessons students at Hevura are learning.“Hevura’s main components are shared living, learning and community service, so we wanted to run in the marathon for Makom L’kulam,” he said.“By us, literally getting outside of the classroom and participating in fund-raising for this organization for the marathon, we are, as Rabbi Abraham Joshua Heschel said, ‘Praying with our feet.’ We’re really committing to what we believe in by helping others.”Weininger said the group has raised $1,000 for Makom L’kulam, half its stated goal.For the third year, volunteers from the Jerusalem police department will be running in the marathon together with disabled children from ALEH Jerusalem, founded in 1982 by parents to provide their severely disabled children with the best healthcare available.ALEH’s residential facilities, located in Jerusalem, Bnei Brak, Gedera and near Ofakim, provide more than 700 children and young adults with specialized services including residential living, medical care, rehabilitative and therapeutic treatment, special education, vocational training, and social and cultural activities.Roni Alsheikh, the former deputy head of the Shin Beit (Israel Security Agency) and current chief of the Israel Police, said that he was so impressed by his officers’ volunteering for the program that he felt compelled to watch the final marathon training session earlier this week.“This initiative with ALEH is tremendous,” he said. “Our role as police officers is two-fold: to serve and protect. It is important for us to remember that we are here to serve the citizens, and not just deal with the criminals.It is our responsibility to provide services to citizens on the streets, as well as seek out opportunities to give back to the community. As police officers, it is our job to be model citizens, and lend a hand to the weakest members of society.“Working with ALEH is the ideal project for my police officers in that it helps remind them who they are as human beings, and why they became police officers in the first place,” he said.