"In light of the new threats, the entire national security network has been put on high alert," Russia's Anti-Terrorist Committee said in a statement. 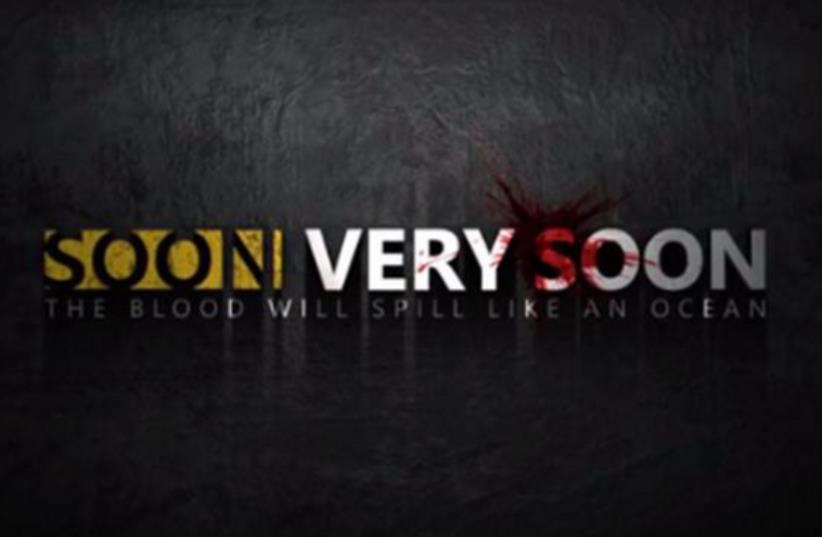 Screenshot from the ISIS video threatening an attack on Russian soil "very soon".
(photo credit: screenshot)
Advertisement
MOSCOW- Russia said it was beefing up its security measures on Saturday following the attacks in Paris, placing security services on high alert, urging vigilance among citizens and promising tighter transport safety measures.Providing little detail, Russia's Anti-Terrorist Committee said that "relevant state agencies" were taking necessary measures to protect Russians."In light of the new threats, the entire national security network has been put on high alert," the Committee said in a statement.Russia's deputy prime minister in charge of the defence industry Dmitry Rogozin said Russian defence bodies had introduced additional anti-terror security measures, according to Interfax news agency.Islamic State, which has claimed responsibility for Friday's attacks in Paris that killed 127 people, has released a video threatening attacks in Russia "very soon," the SITE monitoring group said on Thursday.Russia began air strike operations last month in Syria, which the Kremlin says have been aimed at eliminating Islamic State and other terrorist groups in the country. President Vladimir Putin said Russia needed to act pre-emptively to prevent the spread of terrorism.This weekend Putin will attend the Group of 20 summit in Antalya in Turkey where the fight against terrorism is expected to be on the agenda.On Saturday, Russian Transport Minister Maxim Sokolov said his ministry would implement transport safety measures, RIA news agency reported.Russian Railways, the country's largest passenger carrier, said in a statement that additional steps would be taken to strengthen security and control on the busiest parts of the railway network.Russian aviation regulator Rosaviatsiya said it was not considering suspending flights to France although increased security checks were to be expected at the country's airports.Moscow residents have paid tribute to victims of Paris attacks and laid flowers at the French embassy in Moscow.