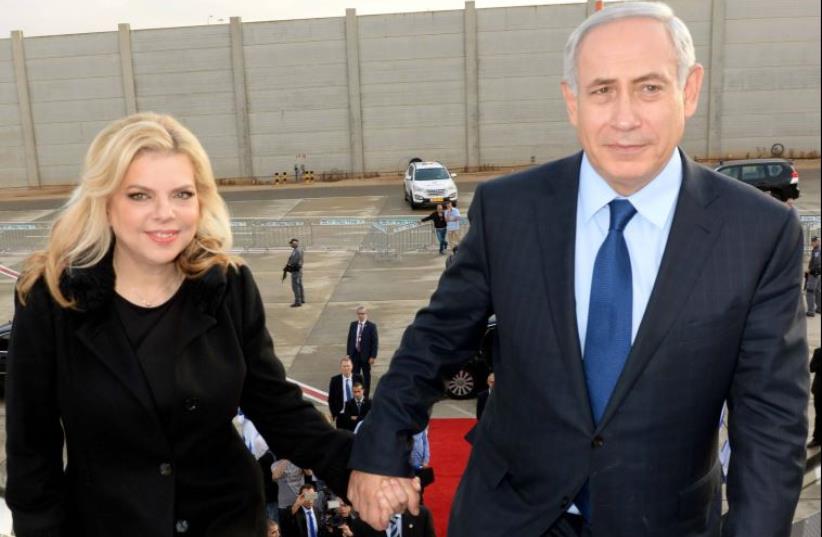 Benjamin and Sara Netanyahu board plane to US at Ben-Gurion Airport
(photo credit: HAIM ZACH/GPO)
Advertisement
Sara Netanyahu on Thursday filed an appeal with the National Labor Court against the lower Jerusalem Labor Court ruling against her and against the office of Prime Minister Benjamin Netanyahu in favor of their former house manager in a civil case.Naftali was house manager from February 2011 to November 2012.The February 10 lower court ruling had ordered the state to pay the former house manager, Meni Naftali, NIS 170,000 for poor treatment and failure to pay him for overtime hours.In her appeal, Netanyahu lashed out at Naftali, calling him a “liar” and “violent.”Netanyahu, who was at the center of the trial but technically was a witness and not a defendant in the case, argued that despite not being a defendant, she had a special right to appeal since the lower court’s decision impugned her standing.Technically, the three defendants were the Prime Minister’s Office, top Prime Minister’s Office official Ezra Seidoff and Prime Minister Benjamin Netanyahu himself, though ultimately he played no role in the trial.In her appeal, Netanyahu said the lower court “did not allow the appellant [her] to defend herself and caused her injustice in that it ignored on point and explicit testimony in her favor and accepted the testimony of the prosecutor despite the explicit evidence that indicated that he lied.”There was some legal confusion in the lower court about how much evidence Netanyahu could bring to improve her standing as opposed to just responding to specific allegations Naftali made against her as part of his narrative, but not as a defendant personally on the hook for damages.The appeal asked the National Labor Court to send the case back down to the lower court with an order to hear additional witnesses and to view additional evidence in her favor or, at the very least, to invalidate the factual findings of the lower court against her.When the lower court ruled, though noting the money would not be enough to cover all of his needs, Naftali responded jubilantly to the ruling, declaring, “David beat Goliath” and angrily accusing the Netanyahus of blocking him for months from finding work.In March, Naftali testified against Netanyahu, stating she often drank excessive amounts of alcohol.During his testimony at the trial on accusations of labor law violations, Naftali claimed that various Prime Minister’s Office officials had broken promises they had allegedly made to him that they would make his house manager position permanent, an upgrade from his status as temporary manager over an extended period.Naftali also complained that there was an incitement and intimidation campaign against him, including breaking into his home.