Slonim, Ettinger and Mordechai Meir were arrested in August following the infamous Duma terrorist arson in which most of a Palestinian family was burned to death. 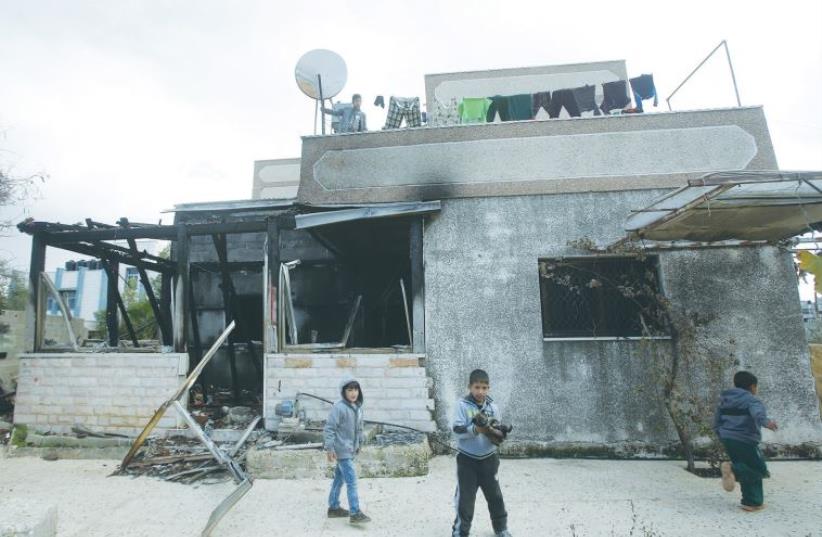 Palestinian children play in the yard of the Dawabsha family home in Duma in December, 2015
(photo credit: REUTERS)
Advertisement
Evyatar Slonim, one of two Jewish settler activists currently in administrative detention, on Tuesday joined counterpart Meir Ettinger in a hunger strike to protest their treatment leading up to a court hearing in February that will determine whether their detention is to be extended or not.Ettinger went on hunger strike last week.Slonim, Ettinger and a third activist, Mordechai Meir, who was released on January 3, were arrested in August following the infamous Duma terrorist arson in which most of a Palestinian family was burned to death.In mid-August, Defense Minister Moshe Ya’alon, with the legal approval of Attorney-General Yehuda Weinstein, took the extremely unusual measure of placing all three in administrative detention.In September, the Lod District Court upheld the order for six months, until at least February.Although hundreds of Palestinians can find themselves in administrative detention for terrorism-related allegations at any given time, it has been years since the measure was used against Jews.Administrative detention is highly criticized globally, since it removes the suspect from a normal trial track. Judges involved use different standards of evidence, and secret evidence that defense lawyers do not have access to can be used.Israel justifies the practice on the basis that suspects that are administratively detained are too dangerous to let loose, yet they may not be able to be convicted in regular trial proceedings because the evidence against them may come from intelligence sources that cannot be revealed in court.There was rampant speculation about whether the three were suspects in the Duma case, but critics on the Right said that they were being scape-goated so the government could try to show that it was doing something while actually unable to catch the real culprits.Meir was released on January 3, the same day that Amiram Ben Uliel was indicted as the sole Duma murderer. This seemingly lifted the charge of murder from the three detainees, leading some to question why Ettinger and Slonim were not released along with Meir.When Meir was released, Honenu, representing right-wing activists in court, proclaimed that the early release of Meir – while the other two activists remain in administrative detention – proved that the allegations of wrongdoing or his being dangerous were exaggerated.The NGO went so far to claim that the Shin Bet (Israel Security Agency) had misled Defense Minister Moshe Ya’alon about how dangerous Meir was in order to get him to sign off on the administrative detention.The Shin Bet rejected the allegations on several grounds, stating that Meir “was connected to the terrorist organization, several of whose members were indicted” for the Duma attack.It also emphasized the “immediate danger that” Meir represented when he was detained; there “was intelligence of his involvement in the [Jewish] terrorist organization.”The security agency said that “with the investigation concluded” and “after a fresh review of the danger presented by Meir,” the decision was made to release him to house arrest with a restraining order to stay out of the West Bank.The security agency and the Justice Ministry have said that Ettinger stands at the head of the same Jewish terrorist organization that is dedicated to “uprooting the foundations of democratic rule in the State of Israel.”Honenu’s statement did not claim to have full knowledge of the intelligence possessed by the Shin Bet, while the Shin Bet did not specifically address why Meir was being released early versus the other two detainees at a time when the overall violence level has not decreased.Over the years, various Palestinians in administrative detention, such as Mohammed Allan and Khader Adnan, have gone on hunger strike and sometimes forced Israel’s hand into releasing them, though usually after having been detained for much longer and after multiple months of striking left them close to death.Ben Hartman contributed to this report.