All of the suspects in the two incidents are residents of Druse communities in the Galilee and the Golan heights. 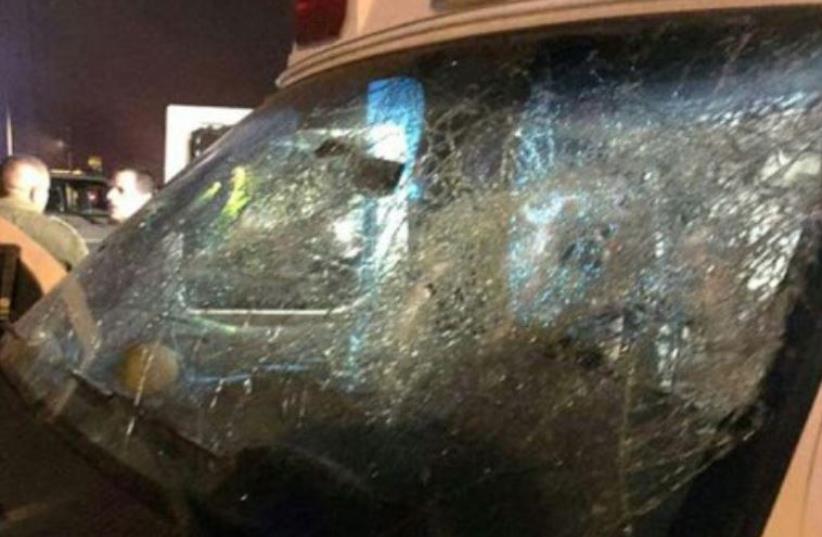 Ambulance attacked in northern Israel by Druse protesters
(photo credit: Courtesy)
Advertisement
The security services on Thursday continued to make arrests in connection to two attacks on IDF ambulances carrying wounded Syrians, arresting three more suspects in the attack on Monday evening outside Moshav Neveh Ativ, on the Golan Heights, in which a mob killed a Syrian man.The three suspects were brought for a remand extension at the Nazareth Magistrate’s Court, where they were ordered kept in custody for five days. They join five other suspects from the same incident who were arrested on Wednesday and given six-day remand orders.Also on Wednesday, four suspects were arrested for an incident before dawn on Monday in which an IDF ambulance was attacked as it was passing through the Druse village of Hurfeish in the Upper Galilee with Syrians on board, en route to Western Galilee State Hospital in Nahariya. The mob stoned the ambulance, and tried to stop the vehicle and chased it until it made it to a police station. Those suspects will remain in custody for at least five days.All of the suspects in the two incidents are residents of Druse communities in the Galilee or on the Golan Heights. A gag order bans publication of any further details about them.Police and security services are looking into the possibility that the mob that attacked the ambulance near Neveh Ativ was tipped off by an accomplice serving in the army. The IDF vehicle was ambushed at the scene, even as other ambulances that had traveled on that route earlier in the day but were not carrying wounded Syrians went unimpeded.