Settler leader to Netanyahu: Authorize more settler homes or else 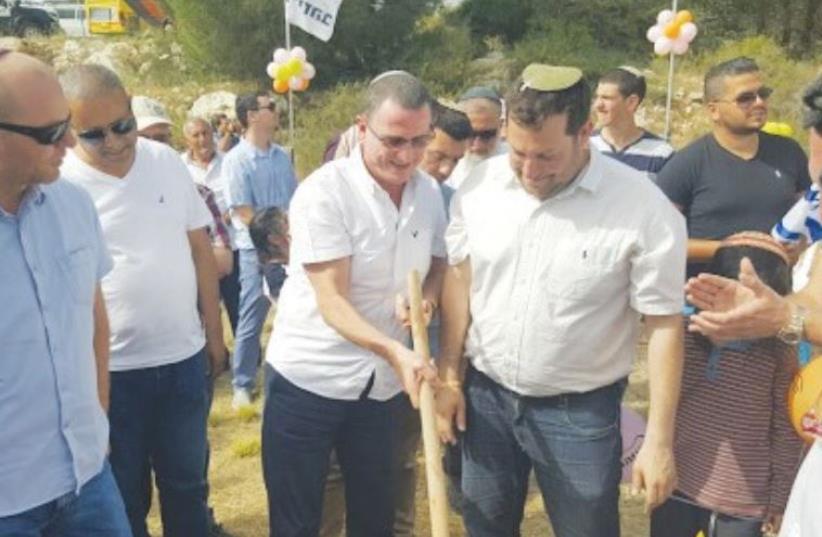 Former Samaria Regional Council Director-General Shlomi Warmstine and Samaria Regional Council head Yossi Dagan symbolically shovel dirt at the Mevo Dotan cornerstone laying ceremony
(photo credit: ROI HADI)
Advertisement
Prime Minister Benjamin Netanyahu could be replaced if he does not authorize more settler homes, said Samaria Regional Council head Yossi Dagan, dismissing as insufficient the June 7 meeting of the Higher Planning Council for Judea and Samaria, which is expected to advance or authorize plans for 2,480 settler homes.“The Likud that leads the ‘national camp’ has to consider putting forward another candidate to head the government, a candidate that intends not to just to speak about a right-wing platform but to execute it,” Dagan said in a video message he sent out on Friday.The Left, in contrast, has attacked Netanyahu for pushing forward the plans just as US President Donald Trump is taking strides to renew the peace process, which broke down in April 2014.“Netanyahu and his ministers are acting like a gang of pyromaniacs who are igniting the area,” said MK Amir Peretz (Zionist Union).The Prime Minister’s Office dismissed Dagan’s attack as an outright falsehood.“Repeating a lie won’t turn it into the truth,” the bureau said. “There is no [settler] building freeze. The opposite is true. In the last few months, thousands of homes have been authorized in Judea and Samaria and for the first time in scores of years a new settlement was approved.”The prime minister, it said, does this while watching out for the country’s national and international interests.“There is no one that worries more about the settlement enterprise than Prime Minister Benjamin Netanyahu,” the office said.According to Peace Now data, the council will advance plans for 957 homes and is likely to authorize 1,523 homes. Among the plans to be advanced are homes for the Amona families in their new settlement of Amihai, and 255 homes for a new neighborhood of the Talmon settlement called Kerem Reim.It added that 38% of the homes were beyond the route of the security barrier.Dagan said the list does not meet the needs of the more than 400,000 residents of Judea and Samaria. After eight years of constrained building under the tenure of president Barack Obama, the residents had expected the government to authorize construction based on their needs and not on a continued policy of restraint, he said.Gush Etzion Regional Councilhead Shlomo Ne'eman said that none of the homes on the council's list were in his region. Unless new homes are approved there is no point in ministers attending the government's official ceremony to mark the 50th anniversary of the Six Day War scheduled for September in Gush Etzion, Ne'eman said."We don't need a ceremony if the simple right for our children to live here is taken away from them," he said.