The High Court of Justice has ordered that both the Amona and Ofra homes must be demolished by February 8. 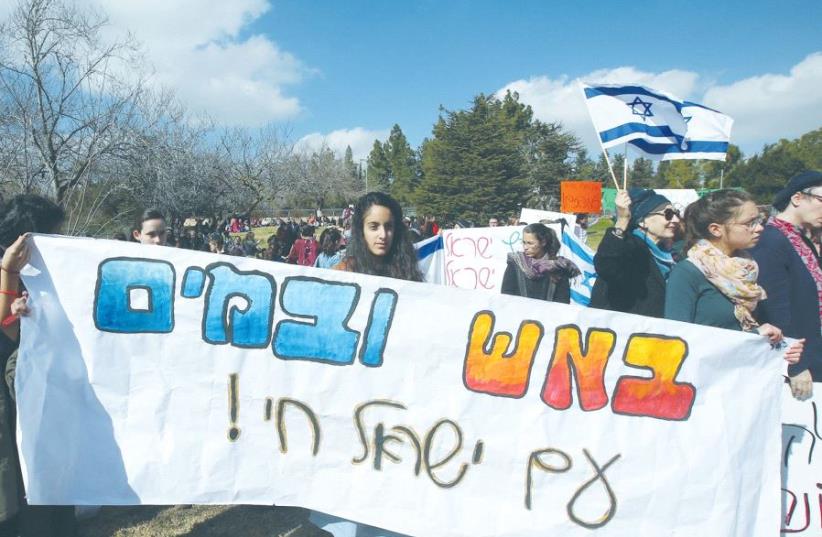 HUNDREDS OF SETTLERS rally yesterday opposite the Knesset in support of the bill to legalize some 4,000 illegally built settlement homes
(photo credit: MARC ISRAEL SELLEM/THE JERUSALEM POST)
Advertisement
The government must save our homes, hundreds of settlers demanded on Monday as they rallied in front of the Knesset. As they marched from the Israel Museum to the Rose Garden, waving signs and holding flags, lawmakers inside debated passing legislation to retroactively legalize some 4,000 homes in Judea and Samaria that were built on private Palestinian property.“We come here to stand in front of the Knesset and the Prime Minister’s Office … because there are still thousands of homes in Judea and Samaria that are under threat of demolition,” said Avi Ro’eh, head of the Council of Jewish Communities of Judea and Samaria.In the past, settlers have explained that unless the government deals with the issue through legislation, they are the mercy of left-wing groups that can successfully petition the High Court of Justice to force the state to remove their homes.After 50 years “this saga has to end,” Ro’eh said. The judicial system has become a tool by which to threaten families, he added.But the settlement bill was not the only issue on the settlers’ agenda. They also demanded that Prime Minister Benjamin Netanyahu give a green light to building in all the communities in Judea and Samaria.They have been particularly disturbed by his attempt in the last week to distinguish between construction inside the blocs versus outside.Acting Gush Etzion Regional Council head Moshe Seville said, “We have to build everywhere so that [even the isolated settlements] will become blocs. The government has an obligation to its voters and we are those voters,” he said.The protesters also demanded that the government find a way to save the 40 modular homes of the Amona outpost and nine permanent homes in the nearby settlement of Ofra.The High Court of Justice has ordered that both the Amona and Ofra homes must be demolished by February 8.In both cases, the structures were built without authorization on private Palestinian property. The legislation at present does not include the homes, because of the High Court rulings.“It’s clear that no one stole any property here,” Dagan said. “This is destruction just for the sake of destruction.I just returned from the US where I held meetings with senior officials in the new [Trump] administration. No one asked me about Amona.No one asked me about the nine homes in Ofra. This is an internal matter that pits 95% of the country’s citizens against a small group of extremist left-wingers that has been funded by foreign governments.“With all due respect” to the work done by Netanyahu, Education Minister Natali Bennett (Bayit Yehudi) and Defense Minister Avigdor Liberman (Yisrael Beytenu), he said, “We’re expecting a solution that does involve uprooting a community. The ball is in your court and that is why the protesters were in front of the Knesset and not next to the White House, the European Parliament or even the High Court.”On Tuesday, the court is expected to hear a new petition by the Palestinians from the village of Silwad who own property on the Amona hilltop.They are asking the court to dissolve the agreement between the state and the settlers that would provide the 40 Amona families with alternative property lots on the hilltop, which they consider theirs.