“Behold, I give my support to our faithful emissary who works for the sake of Heaven, who respects and appreciates our rabbis and the merit of many rests in his hands." 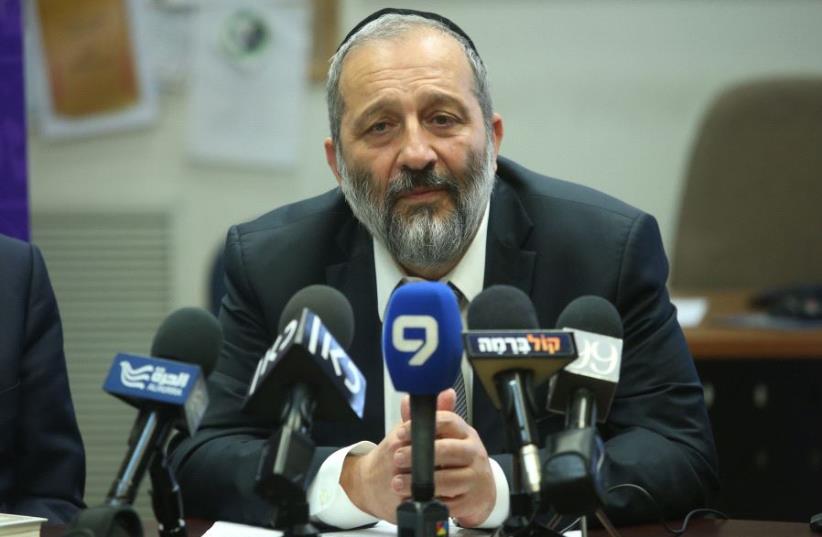 Aryeh Deri
(photo credit: MARC ISRAEL SELLEM)
Advertisement
Rabbi Shalom Cohen, the spiritual leader of the Shas movement, has publicly given his backing to Shas party chairman and Interior Minister Arye Deri following the leak of a recorded phone conversation that has caused Deri considerable embarrassment.In the conversation, broadcasted by Channel 2 News, Deri referred to Jerusalem Chief Rabbi Shlomo Amar as simply “Amar,” without his rabbinic title, and appeared to be remonstrating somewhat unsuccessfully with Cohen’s son Yaakov.Deri was roundly criticized for disrespecting Amar by failing to refer to him with his title, as is customary within the religious community, while it was also noted that Deri’s iron grip over the direction of Shas appeared to have loosened given his attempt to persuade Yaakov Cohen to adopt his position.The two were discussing efforts led by Yaakov Cohen to ease political divisions among the Sephardi Haredi community and to reconcile with Amar, who has become a staunch enemy of Deri despite previously having been extremely close to the late, revered Rabbi Ovadia Yosef who led Shas until his death in 2013.“Behold, I give my support to our faithful emissary who works for the sake of Heaven, who respects and appreciates our rabbis and the merit of many rests in his hands, our friend Rabbi Arye Deri, whom I have known for a long time and whose fear [of Heaven] precedes his wisdom, and his wisdom is great,” Shalom Cohen wrote in a letter published Wednesday night.“He is the only one who is authorized to speak in my name and in the name of the holy movement... And he consults us on all matters and does not move from our instructions,” he said.Cohen has always been known to be a strong supporter of Deri and backed him when he returned from his political exile, during and following his imprisonment for bribery, to take back the party leadership from then-Shas chairman Eli Yishai.It is this strong relationship which made the recorded phone call between Deri and Yaakov Cohen more surprising, since the latter was advancing a policy of political reunion which Deri was ardently against.On Wednesday, Yaakov Cohen filed a complaint to the police that his phone had been illegally wiretapped and a private conversation had been recorded and disseminated.Members of Shas have claimed that a confidant of Amar was somehow able to wiretap Yaakov Cohen’s phone and embarrass both him and Deri.Israel Hayom reported on Wednesday, however, that Deri and his associates blame Yaakov Cohen entirely and accuse him of having leaked the recording.Yaakov Cohen has strenuously denied this, saying that he did not even know how to record a phone call. He said it was possible that a previous phone he had used had “recorded phone calls automatically and that, when it was taken to the lab for repairs, media were extracted from it and disseminated by hostile and evil elements who have been trying to harm the holy movement.”