Mogul and his wife Miriam, who are not suspects in the investigation, arrived at the 'Israeli FBI' headquarters in Lod to give their testimony. 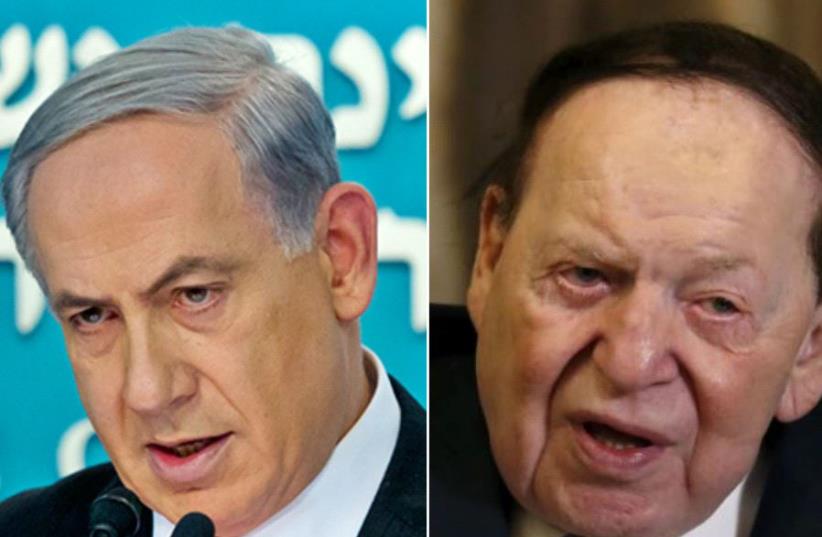 Benjamin Netanyahu and Sheldon Adelson
(photo credit: REUTERS)
Advertisement
US billionaire Sheldon Adelson provided testimony to Israel Police on Thursday in the investigation of Prime Minister Benjamin Netanyahu regarding alleged collusion by the premier with a newspaper publisher.The testimony was first reported by Hebrew media and confirmed with a police source by The Jerusalem Post. Adelson’s wife, Miriam, is also expected to testify. Adelson, who is not a suspect, gave his testimony at the Lahav 433 headquarters in Lod.The investigation, termed Case 2000, revolves around recordings of Netanyahu and Yediot Aharonot publisher Arnon Mozes in which the two men allegedly sought to weaken the Adelson-funded Israel Hayom. Israel Hayom is a free daily generally seen as pro-Netanyahu, which has undercut Yediot’s advertising revenue.Netanyahu has repeatedly denied any wrongdoing in the case, repeating his mantra: “There will be nothing, because there is nothing.”According to a separate source, Thursday’s testimony will be Adelson’s only testimony.The testimony was organized with police prior to Adelson and his wife’s arrival in Israel this week for the visit of US President Donald Trump. The casino mogul was a mega-donor to Trump’s presidential campaign.Police view the testimony of Miriam Adelson as highly important as she is reportedly more involved with the operations of Israel Hayom, Hebrew media reported.According to leaks of the Netanyahu-Mozes conversation reported by Channel 2 in January, Netanyahu allegedly told Mozes he would ask Adelson, whom he referred to as the “redhead,” whether a Knesset bill to weaken Israel Hayom would be acceptable to him.The prime minister is also being investigated over suspicions that he accepted illegal gifts from businessmen totaling in the tens of thousands of shekels. Channel 2 also reported that police are going to recommend to indict Netanyahu in the gifts case, however, the final decision will be made by Attorney-General Avichai Mandelblit.