Trump's recognition merely signaled a US recognition of the reality on the ground, that Jerusalem is and has operated as Israel's capital since its founding, Chemi Peres affirmed. 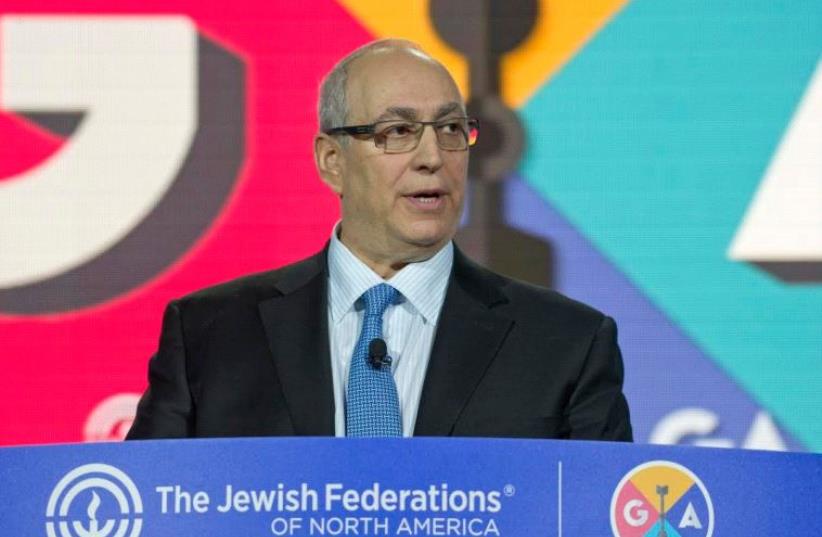 Chemi Peres, son of the late Ninth President Shimon Peres, speaks at the GA – the annual Jewish Federations of North America convention.
(photo credit: RON SACHS/CNP PHOTO)
Advertisement
The late Shimon Peres's son sees the gradual modernization of some Arab states and their slow warming toward Israel as an encouraging path toward the Middle East his father envisioned, he said in a Sky News interview Wednesday night.The future his father dreamed of and often spoke about, Chemi Peres said, exchanges economies based on natural resources and land ownership for markets of science and technology. "We can collaborate to shape a much better future for all of us — Israel and its neighbors [in the] region — if we move into the future and start focusing on science and technology," he said. "Greatness comes from brain power, not land. [That's] what we should focus on for the future."He continued: "Israel needs to be part of the startup region, not just startup nation."
Vice President Mike Pence speaks at the Israeli Kenesset (YouTube/US Embassy in Israel)
When asked about Palestinian outrage following US President Donald Trump's recognition of Jerusalem as Israel's capital and Vice President Mike Pence's speech laden with biblical references at the Knesset, the son of the late legendary Israeli statesmen expressed surprise. As has been the general consensus among Jewish Israeli politicians, Trump's recognition merely signaled a US recognition of the reality on the ground, that Jerusalem is and has operated as Israel's capital since its founding, he affirmed. "I'm surprised [about the] Palestinian reaction to Trump's [move], his statement didn't say anything that shuts doors for negotiations in the future," Peres said.But Chemi Peres was clear in articulating Shimon's vision for a peaceful region, and shared what his father told him was his biggest regret after "seeing the reality in Israel compared to his dreams when founding Israel.""I should have dreamed more, and dreamed greater dreams," he recalled his father saying.