Rafi Lisker was moderately injured in the December 2016 attack in Efrat. 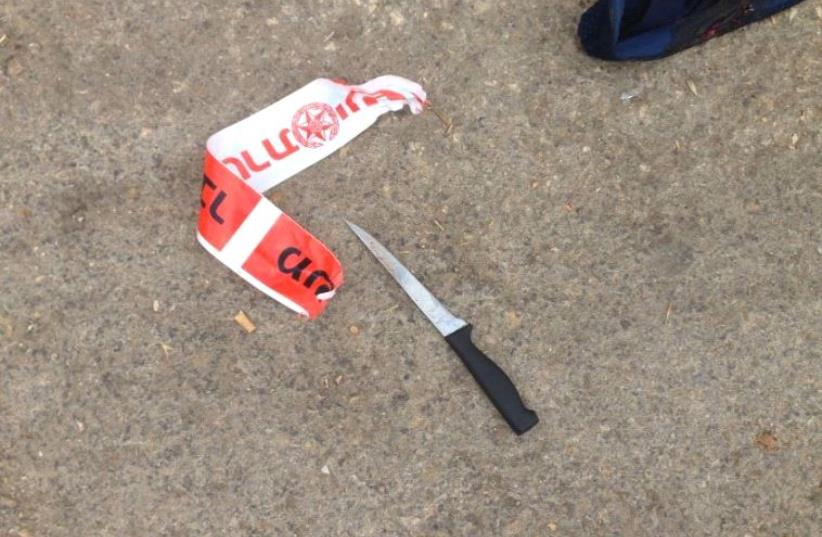 Knife.
(photo credit: COURTESY ISRAEL POLICE)
Advertisement
Two years after an Israeli man was wounded in a stabbing attack in the West Bank, the Shin Bet has arrested the Palestinian suspect.Ayman Muhammad ‘Ali Fughara, a 27-year-old resident of the village of Jorat a-Shama and a Hamas supporter, was arrested in a joint Shin Bet (Israel Security Agency), IDF and Israel Police operation.
According to the Shin Bet investigation, Fughara purchased the knife and infiltrated into the settlement of Efrat in December 2016 “in order to murder Israelis,” the Shin Bet said in a statement.There he snuck up behind a couple walking on King David Street, and stabbed the husband, Rafi Lisker, multiple times in the upper body before he fled.The man was taken to the Shaare Zedek Medical Center in Jerusalem light to medium condition before being released the following night.The findings of the investigation were transferred to the military prosecution to file an indictment in his case.“The Shin Bet will continue to work along with other security services to prevent terror attacks and catch terrorists, no matter how much time has elapsed since the attack,” the agency said Monday.Since October 2015, Palestinians have stabbed, run over and shot Israeli soldiers and civilians, including some tourists, in waves of violence in the West Bank and Israel. Even with Israeli security forces, including the Shin Bet, IDF and police increasing their efforts to prevent lone wolf attacks, 17 Israelis were killed in 2016, and another 20 in 2017.