Jerusalem man tries to bring in goods ahead of the holidays under the noses of airport customs officials. 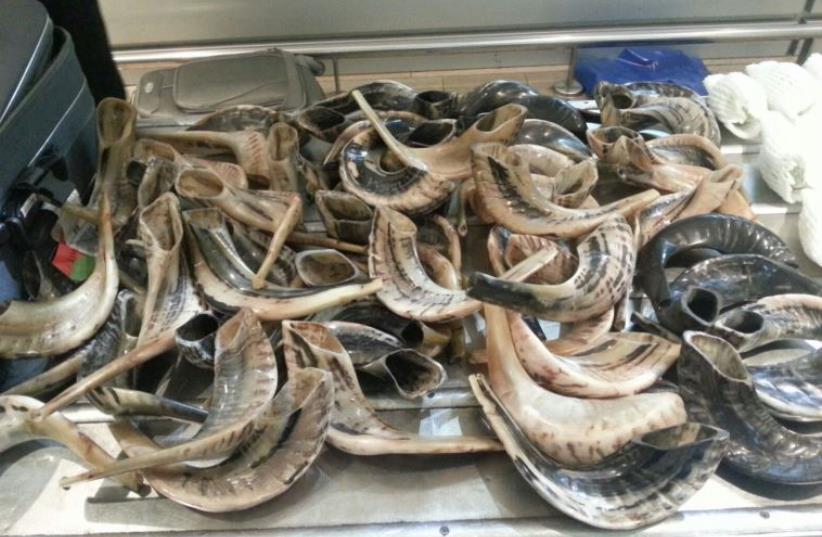 Shofars and Etrogs seized by Israel Customs Authority
(photo credit: BEN GURION AIRPORT CUSTOMS)
Advertisement
An Israeli man was caught attempting to smuggle dozens of shofars and etrogs past customs at Ben-Gurion Airport over the weekend, authorities announced Monday.The etrog, a yellow citrus fruit that can sell for as much as NIS 500 and is one of the Four Species of Succot, is a common item that smugglers try to bring into the country.Passengers coming through customs at Ben-Gurion are allowed to bring one etrog with them, however, the fruit must be presented to a representative from the Agriculture and Rural Development Ministry, or in his or her absence, a customs official, in order to prevent the entrance of contagious lesions and pests into the country.The passenger who was stopped by customs officials over the weekend was found attempting to smuggle 53 shofars and 40 etrogs from Morocco in two suitcases through the area for passengers who do not have anything to declare. The 50-year-old resident of Jerusalem's Beit Vegan neighborhood was trying to avoid paying import duties, according to authorities.This was the second such large catch of the season by customs authorities who intercepted a shipment of some 100 etrogs last week.