Sleepless in Jerusalem: Preparing to hear the Ten Commandments

Where did this custom originate? 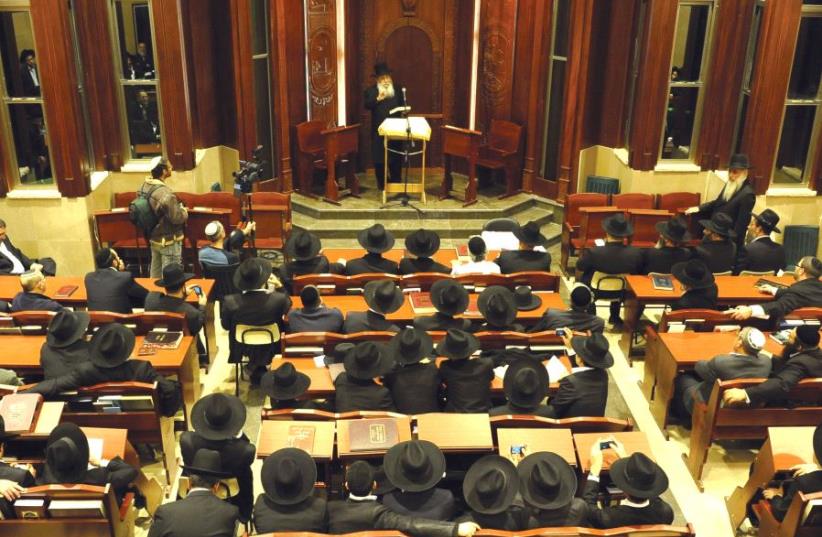 Studying Torah
(photo credit: Wikimedia Commons)
Advertisement
At around 3 a.m. on Shavuot morning Jerusalem’s streets become alive. Hundreds of men and women pour out from their synagogues and homes and make the trek toward the Old City. Ancient Jewish melodies drift through the alleyways and the pitter-patter of children’s feet breaks the silence of the night.The custom is to stay awake the whole night in order to study Torah in preparation for the hearing of the Ten Commandments and in Jerusalem especially, this custom is widely kept. Thus, as dawn breaks on this auspicious day, the Kotel plaza becomes packed with minyanim and cantors, who, in countless dialects and tunes, all read the story of the Jews receiving the Torah at Mount Sinai.Where did this custom originate? The Magen Avraham explains that the pious have a custom to stay awake the night of Shavuot in order to repair the mistake that the Jews made on the night prior to the receiving of the Torah. The Midrash explains in Shir Hashirim Raba that on that night “the sleep was sweet and the night was short.” In fact, the Jews were so fast asleep that the Midrash explains that God himself had to come awaken them in order to give them the Torah. In Isaiah 50:2 God references this moment, when He says: “Why did I arrive [to give the Torah] and no one was there? I called, and nobody answered.”Thus, the Magen Avraham concludes that in order to correct this error of our forefathers we stay awake and prepare for the upcoming holy moment.However, the fact that the entire Jewish population slept in on the morning of receiving the Torah is quite baffling. Wasn’t this an event that they had been counting down to since leaving Egypt, which is the basis for counting the Omer, as the Ran says at the conclusion of tractate Pessahim? Where were their early-rising infants, the insomniacs, the righteous? How could it be that they all required to be awakened by God Himself? In many cultures in the world, specifically in Eastern religions, spirituality is synonymous with the ability to rise above the physical world. Our bodies, our jobs and the world we live in are seemingly mundane at best, crass at worst. Thus, in order to reach holiness, many believe that we need to separate ourselves from the material and from physicality.On this note, it is explained in Bereishit Raba 14:9, that when a person sleeps his or her soul ascends above the body and actually reaches a higher plane than when the person is awake. For this reason, when preparing to achieve the spiritual heights that would take place with the receiving of the Torah, the Jews thought it would be best to prepare by ascending to the most spiritual plane that they knew how to visit – sleep.But this was the mistake. On that epic morning when a traveling Middle Eastern tribe transformed into “The Jews,” God informed them that what makes their religion unique is its focus on using the physicality itself in order to connect with God.Instead of sleeping and achieving holiness through separation from the world, God desires that we remain conscious of its issues in order to work to correct them, one earthy step at a time. Instead of becoming ascetics, God tells us in the Ten Commandments to learn a trade, (“For six days you should work”), visit our parents (“Honor your father and your mother”) and not to waste or destroy any of His creations (“Do not murder”). God does not consider our bodies, our job, or our world as mundane, and definitely not crass. Instead, He wants us to connect with Him in the best way that we can, using all of the talents and capabilities that He created us with. Instead of running from the world, God wants us to embrace it, love it and work to improve it.Therefore, to remember this message, we spend the night preparing for the receiving of the Torah by remaining conscious. We stay awake all night learning, or even noshing and joking with our friends, in an effort to remember that God wants a relationship with us as alive and complicated people.Then, as the first glimmer of sunrise begins to peek out from over the Judean Hills, we carry our exhausted bodies to the Kotel or to the synagogue to hear the Ten Commandments, feeling the weight of our physicality, the limits of our human-ness.And we embrace it.

The writer, a rabbi, is originally from Pittsburgh. He made aliya in 2014 and lives in Jerusalem.
Advertisement
Subscribe for our daily newsletter