Temperatures are slated to drop across the country and rain, strong winds and stormy conditions are expected to continue for the next few days.

Snowfall on Mt. Hermon, December 31, 2015
(photo credit: MT. HERMON MEDIA)
Advertisement
Light snow began to accumulate Friday morning on Mount Hermon as inclement weather was forecast across the country. In light of the wintry conditions, authorities closed the Hermon area to visitors.
Hermon snow
The Israel Meteorological Service (IMS) forecasts more snow Thursday night on the mountain's peaks along with the Golan Heights.A chance of light snow over the hilltops of the Galilee region was also forecast by the IMS. The IMS also warned of rains and the risk of flash flooding in the Negev. 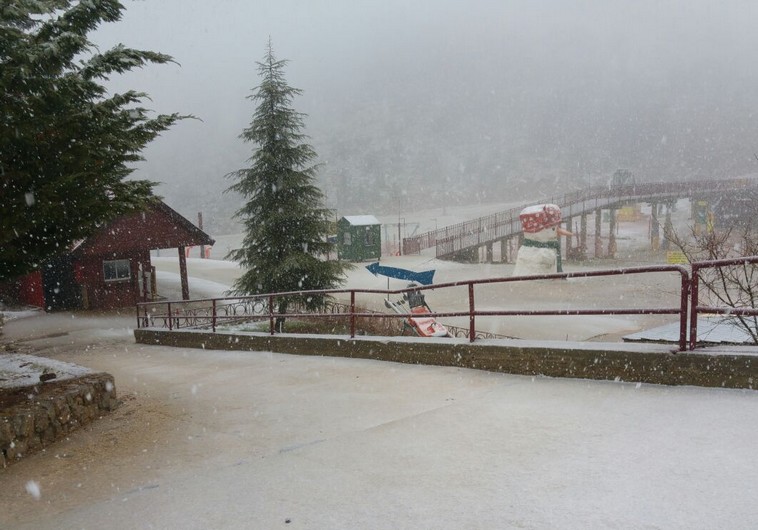 Throughout the rest of the country, temperatures were slated to drop and rain, strong winds and stormy conditions were expected to continue until Sunday. Local and regional authorities began to make preparations on Wednesday, as forecasts showed thunderstorms, drops in temperature and heavy rains for much of the country over the next few days.The incoming storm is typical for the season, caused by an upper air trough with cold air from Russia, accompanied by a depression from Cyprus, explained Amos Porat, head of the Israel Meteorological Service’s Climate Department. A meteorological trough features low atmospheric pressure, as opposed to a ridge, which features high atmospheric pressure.On Tuesday, the Water Authority had warned that Lake Galilee’s water levels were plummeting, due to the lack of substantial rainfall in the North thus far this season.Authority officials expressed their hopes on Tuesday that the large amounts of precipitation forecast would benefit the reservoir.Sharon Udasin contributed to this report.