“Most of these employees have been with us for six years, and I’ve been begging the government to let me keep them,” said SodaStream’s CEO Daniel Birnbaum. 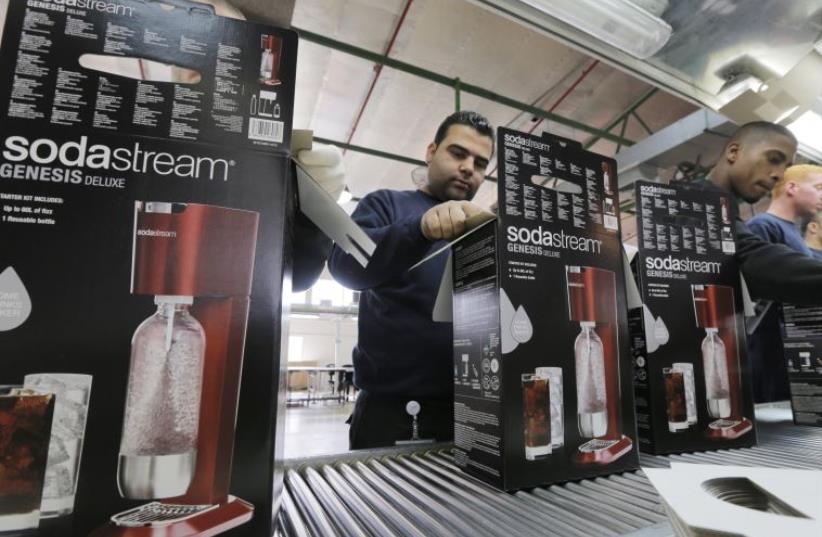 Employees pack boxes of the SodaStream product at the factory in Maaleh Adumim
(photo credit: REUTERS)
Advertisement
The CEO of SodaStream is threatening to shut down its main plant in Lehavim at the end of the month if the government does not renew entry permits for 74 longtime Jerusalem- area Palestinian employees.The 74 employees, ranging from assembly line workers to shift managers, received the permits to make the three-hour daily round trip to the new factory near Beersheba last fall when the company closed its main plant in the West Bank industrial zone of Mishor Adumim near Ma’aleh Adumim. Another 500 Palestinian employees of SodaStream lost their jobs due to the plant’s closing. The work permits were restricted to those Palestinian employees who are married with children. The current permits expire at the end of the month.“Most of these employees have been with us for six years, and I’ve been begging the government to let me keep them,” said SodaStream’s CEO Daniel Birnbaum on Wednesday inside one of the company’s four factories on its expansive campus at the Idan Hanegev industrial area, a joint work zone for the Beduin town of Rahat, the Jewish community of Lehavim and the Bnei Shimon region. “These are ambassadors of peace, whom we bus in every day, and it’s been a long, terrible fight with the government to get them to keep their work permits, even though there are more than 100,000 Palestinians working inside Israel every day. But they won’t let my 74 continue to work. It’s just unbelievable.”Ali Jafar, a 39-year-old married father of five from Sawahrah, near Ma’aleh Adumim, is one of the 74 employees who is getting the ax next month if the entry permits are not renewed.“I don’t know what I’ll do. I was lucky to have been able to keep my job when the plant closed in Mishor Adumim,” he said. “Many of my friends who lost their jobs are either still unemployed, or only recently began to work, thanks to efforts by SodaStream to find placements for them.”Jafar said there is a sense of equality at SodaStream.“My salary and benefits are good, and I can raise my family with honor.”Another employee from Sawahrah, Yasin Abu Ateek, said he leaves his home at 4:30 every morning to meet the company-provided van and returns at 7 p.m.“It’s a long day and I don’t get to see my children during the week, but I am happy that I have this job,” he said.Birnbaum blamed a “sense of paralysis” in the government as being the main obstacle in preventing the renewal of the entry permits, explaining he is being passed around from the Finance to Public Security to Economy ministries. But he vowed to up the battle as the month comes to a close.“I’m not letting go of these people. I owe them six years of friendship and service. They’re staying here, and if they’re not staying here, then I’m not staying here. If I have to shut down this factory, I’ll shut it down,” he said.An official in the Prime Minister’s Office told The Jerusalem Post it was government policy to favor Israeli workers over foreign workers.The government plans to continue to help the company within the framework of the law as it does with other factories in the region.SodaStream employs some 1,200 people in the Lehavim plant, which opened last year – including 400 from Rahat, 300 immigrants from the former Soviet Union and both about 100 Ethiopian olim and Israeli Arabs.Since its 1978 arrival in the country, SodaStream has positioned itself as the world’s top homemade sparkling water brand. Its product is sold in 45 countries, with revenues of $112.9 million for the fourth quarter ended December 31.“We’ve grown to five times the sales of what we had a few years ago. We’re twice as big as Perrier,” Birnbaum said.But more than the sales, Birnbaum said he’s proud of the environment of coexistence the company has created.“It’s an incredible island of peace. People make think we make soda makers, but we really make peace, every day. And on the way, we also make some soda,” he said.SodaStream received worldwide prominence not only for its product, but for being targeted by the Boycott, Divestment and Sanctions movement over its Mishor Adumim plant. That glare was magnified when Hollywood star Scarlett Johansson appeared in a highly publicized Super Bowl television ad for SodaStream in 2014. BDS supporters accused Johansson of supporting Israel’s settlement policies and, refusing to back down, the Jewish actress resigned as a spokeswoman for Oxfam, which had also criticized her appearance in the ad.“We didn’t leave Mishor Adumim because of BDS, we had a consolidation plan and we simply ran out of room for expansion there,” Birnbaum said. “However, if it wasn’t for BDS, we might have stayed there another year or two, so it did have some effect."“So, you can say that BDS was responsible for 500 Palestinians losing their jobs when SodaStream moved. But now 74 Palestinians are about to lose their jobs for no reason because of the Israeli government.”Niv Elis contributed to this report.